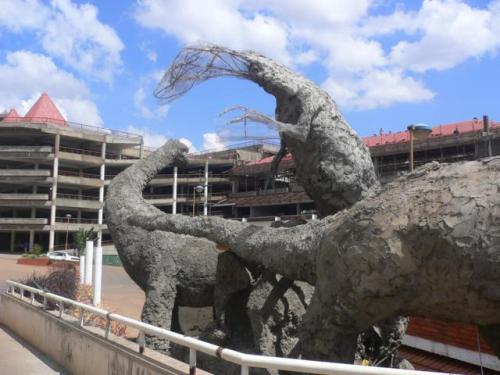 Mention Uganda and most people’s spontaneous response used to be Idi Amin or Raid on Entebbe. These days it’s Forest Whittaker playing Idi Amin. Those horrors were 25 years ago. For the last two decades President Yoweri Museveni has been the Big Man ruling this country of 27.6.million, a patchwork tribal population.

Uganda’s current long-term war in the north is still playing out in stalled peace talks in southern Sudan. The foe is the guerilla Lord’s Resistance Army, a vicious and wacky lot who kidnap, terrorise and enlist children in the name of God. Each night, thousands of children march long distances to safe havens to avoid abduction.  1.8 million people are living in camps.

All this is a long way from Kampala – at least 8 hours by road. In this capital of 1.2 million, life is a series of visual contrasts as economic development rushes into the city.  The blue glass high rise of the social security building is fringed by streets where vendors loll on the pavement; a young boy stands patiently behind bathroom scales waiting for a rare customer; men in suits use phones at mobile kiosks. 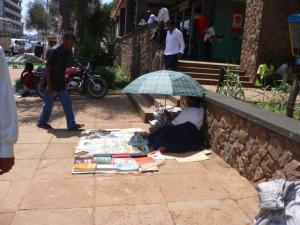 And these are the magazines

A bold construction program is delivering hundreds of new hotel rooms for CHOGOM in November. The Aga Khan’s Serena hotel is up and running with its strange mix of Rajasthani/African/Islamic architecture. The homeless Karamajong children from the warrior tribe in the west have been rounded up off the streets as part of the tidying up process for the Heads of Government. Main roads are being repaired. 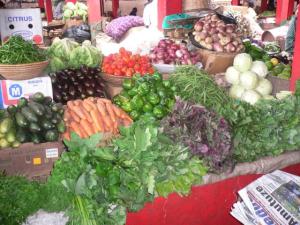 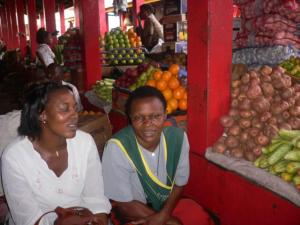 Women in the markets 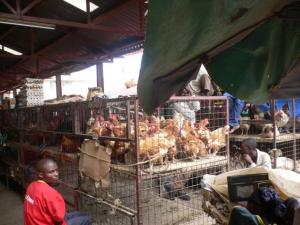 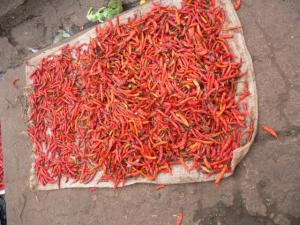 Markets everywhere in the third world are the heart of a city… beats a mall any day!

New oil exploration is another heralded bow to the economic fiddle while in parts of the country up to 60% of people still live in traditional huts without access to safe water or electricity. Though back in 1956 when Princess Elizabeth came to visit Murcheson Falls, she had all mod cons in a purpose built house. we were lucky enough to stay in the charming house and hear the hippos pass during the night. 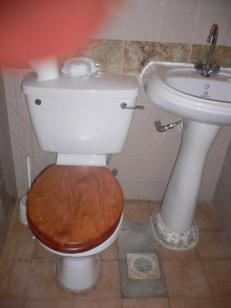 And the Princess’ mod cons.

The house built for Princess Elizabeth

The 7 hills of Kampala bear absolutely no resemblance to those of the Eternal City but they are as symbolic.  They demonstrate the various lifestyles and beliefs systems that shake along together in this city. A grand mosque gifted by the Saudis, a Catholic cathedral, a Hindu temple, the city centre, an enclave of prestige bungalows each with a verdant garden (and all guarded by armed security)  – each crowns a different slope.

Kampala is a city where differences seemingly live serendipitously together. And there is an Art Gallery.

Modern art with a gun.

Nature isn’t leaving the city centre without a fight

There are many rich and middle class people here both Ugandan and ex-pat, many of whom are part of the army of aid personnel. These enjoy the fringe benefits of any sophisticated city, from supermarkets and bars to a French patisserie and a Belgian butcher all set in the sawtooth streetscape of many developing cities. The affluent can even enjoy a nearby resort on the shores of Lake Victoria with horse riding and the largest swimming pool in East Africa.

But here’s another example of the impact of change, the lake has receded about 100 metres in the past two years following the construction of a damn at nearby Jinja, the fabled but now questioned, mouth of the Nile.

Outside this world of bars and pools, compare the life of the vast majority of Kampalans struggling to find a living income.  There is sadness in the eyes of one as he talks of a dead baby daughter killed by witchcraft and his long term employer who would give him no money to get a doctor. Another man’s eyes wash with emotion as he speaks of “the brothers” who are still suffering in the war -torn north. At a busy crossroads, a boy stands with his blind grandmother day after day, charity their only hope for survival. The slums of Kampala remain.

Yet these people, subdued by a history of horror, have a quiet dignity. The courteous greeting and genuine enquiry after family wellbeing slows one down to the core elements of life. This is a marked difference to the bustle of western cities. If nothing else the local innate style in the wearing of beautifully pressed, mostly second hand clothes, makes most westerners look dowdy.

Outside the bustle of town, the site where the kings of Buganda are buried boasts a large grassed hut. The Buganda, a Bantu people, are the largest tribe in Uganda with 16% of the population mostly settled around Kampala. Work is slowly proceeding on restoring grass roofs and re-matting boundaries in anticipation of CHOGOM when the Queen of England will visit the tombs of the kings of Buganda. She will not be allowed to pass the fence of spears however, unless she too is drawn into the mythical forests where the local dead kings now dwell. 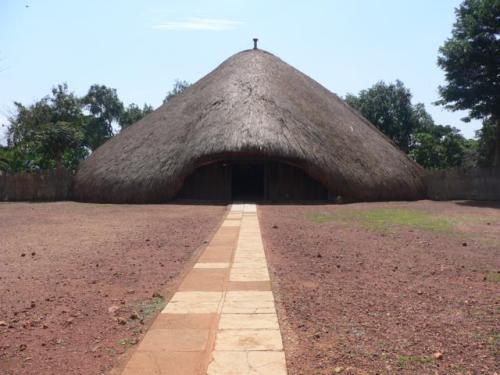 The grass hut of the Bugandan kings

Work on the restoration is not going at a cracking pace with some suggestion that UNESCO funding has been siphoned off. The local paper is full of the current audit of central government departments where vast monies are unaccounted. A recent scandal fingered the Kampala City Council and every urban pothole is a reminder that corruption is a fact of business in many worlds.

These are boom times for some. In the café at the Sheraton, tables are occupied variously by 4 well-tailored Indians, a glamorous blond woman with a Clark Kent look-alike, a pair of elegant African women, and an intense group of English and Africans. A sign of the times is the laptops open and at work on every table.

Many more Australian tourists will find their way to Kampala as a middle aged group, one boasting the Tamworth County Music festival T shirt, advised me. The city is a jumping off ground for the truly intrepid who want to see the gorillas in the mist of the Mountains of the Moon, a day’s journey to the west of the capital at Biwindi Impenetrable National Park.

And cows on the road

Of course there are baboons

If you look closely, you can see the elephant

If you are a wildlife tourist, most of the big game was wiped out by vicious slaughter during the Amin regime but it is returning to Queen Victoria National Park and Murcheson Falls.

In the national parks the animal numbers are growing again

Churchill called Uganda the Pearl of Africa. More tourists would help buff its dulled lustre and provide welcome income for many. Don’t wait until the hordes come, get there early!