Iceland 2….The Golden Circle plus some.

This blog is basically about the awesome tempestuous living landscape of Iceland.

From the moment I left the airport it was clear that this was a land different from any I had known. I was 100 k’s from the Arctic Circle but July warmish. The distant volcanic hills were snow patched blue, dressed in cloud, while in the foreground, intense green fields dazzled. Further along a 30 million year old mountain was ringed with lava.

Now was the time to leave the town and experience the land.

If you’ve heard anything about Iceland, this day trip is probably it. The story is that when Gorbachev and Reagan held a summit in Iceland in 1986, a US news team reported on the stunning country they visited in the down time. Since then, this round trip has starred on the tourist bucket list.

Some 25 k’s east of Reykjavik, this is a UNESCO World Heritage site and home to the world’s first ”parliament”, a two weekly annual open-air gathering of the tribes that first met here in the Middle Ages (930AD) and continued until 1798 to make laws and settle disputes.

The Althing as the gathering was known (and as the current Parliament is still known) was held in a verdant field, an active volcanic site, fringed by a majestic granite cliff. A grassy knoll with an Icelandic flag is reputed to be where the Lawspeaker read out the laws agreed by the Althing.

Below is the granite cliff with the flying flag and the path that meanders through the site.

Here in the mists of time, paganism was the first religion before conversion to Christianity was proclaimed. Back in the day men were burnt here for witchcraft and women drowned in the lake filled with glacial water. Unsurprising then that these fields have provided one scenic backdrop for the popular “Game of Thrones” series.

Myth runs strong here. Trolls and elves are still part of Icelandic superstition and it is easy to see why. Tourists on the cliff top reminded me of the myths and legends – it isn’t a long stretch to see them as the tribes coming for the Althing gathering back in the day.

Through the fields of the first Althing, a wonderful walk takes you to the picturesque site of the first Icelandic (10th century) church rebuilt in the 1850s; it adjoins the summer home of the Prime Minister.

This house (above) is built in the old vernacular with the exterior of multiple matching front facades with a unified interior.

Further on you can peer into the remarkable chasm where the Northern American and Eurasian tectonic plates meet and diverge triggering natural ramifications like the 2010 volcanic eruption which affected air travel throughout Europe. Brave or foolhardy divers go deep here. This is truly an iconic place.

Our second stop is the spectacular double drop waterfall. The river plunges 32 metres into a crevice which is also 32 metres deep. Both falls are perpendicular to the flow of the river.

The endearing story is that Sigridur, one of 13 children, lived here on what was then a sheep farm (1874-1957). The farm had this massive powerful waterfall, Gullfoss. Sigridur and her sisters loved the falls and guided visitors there, cutting the first paths. She was self-taught, a well-read and talented illustrator and embroiderer.

Sigridur’s father was approached by foreign investors wanting to dam the waterfalls for hydroelectrical production but she fought to protect it.

It is said that she walked barefoot the 120km to Reykjavik, to urge the politicians and financiers to leave the waterfall alone. She threatened to throw herself over the waterfall if they were to be dammed.

She briefed a lawyer who later became Iceland’s first President. The investors could finance the deal. Gullfoss became a National Park in 1979. A monument to Sigrid stands at the site. 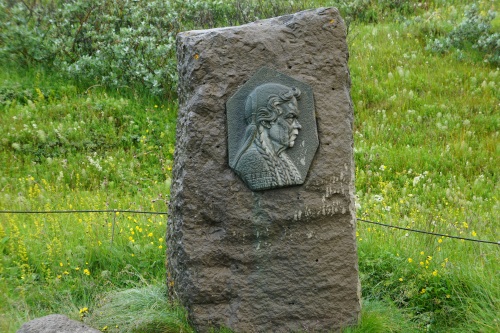 There is something amusingly weird watching tourists stand around, cameras at the ready waiting for a spurt of water into the air.

“Geysir “ is actually the name of a specific grand spurter who has given his name to this phenomenon all over the world. He has been active for 10,000 years but now spurts rarely. It is said that in 1845 his eruptions reached 170 metres.

We are here to see another geyser and tourist ‘picture opportunity’, Stokkur who sits surrounded by petticoats of small geysers.

We leave the Golden Circle but not before a stop to visit a second waterfall and the “National Geographic” picture perfect beauty of salmon fishermen in an idyllic stream next to a fish ladder.

I was told these enthusiasts can pay up to US $5000 a day to the farmer for the pleasure of trying their hand at catching one of these fine fish in his or her lake. 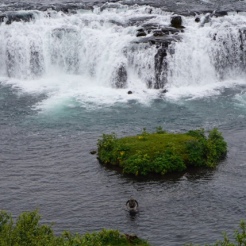 Dinner that night is a surprise. It is at a tourist venue. Usually I would avoid such but in Iceland things seem different. It is a horse show. We are to see the famous Icelandic horses perform their famous fifth gait, a rocking horse movement known only to this breed. 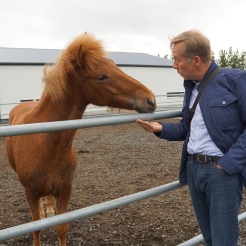 So treasured are these small sturdy pure bred Icelandic horses that should one leave the country for whatever reason (sale overseas being a major reason) then they are never allowed to return due to fear of disease.

Driving back to Reykjavik in the light that lingers to near midnight, we pass fields of lava. I think I can see some trolls. Why wouldn’t there be since this land is alive?