Spanish countryside
From the train and driving across the plain, I remembered how last time in Spain I thought the Spanish countryside had echoes of Australia: fields of yellow grasses, undulating hills, drab green bushes. Along the highways vibrant hedges of pink, purple and white oleanders mark the centre. Here in the sierras, the mountain ranges are much gentler than our mountains but still the eucalyptus flourishes with the pine. 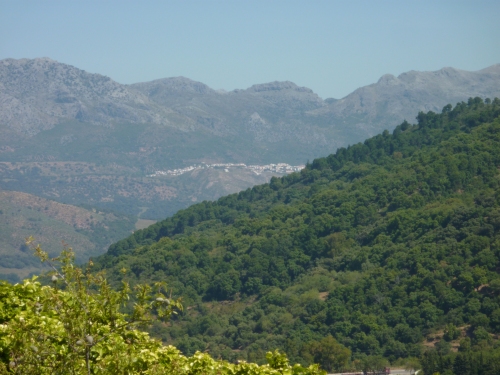 If you look across the mountain, you can se a village nestled

The low mountains are dotted with white washed villages some tumbling down the hill, some resting on the plateaux. It’s like the goddess took a handful of pearls, tossed them in the air and they landed randomly across the ranges. The narrow streets sometimes follow the winding curves  of the earlier Moorish inhabitants although the strategic importance of the area was first the focus of Roman settlement.

Further up the hills the cave paintings are older than those at Lascaux. 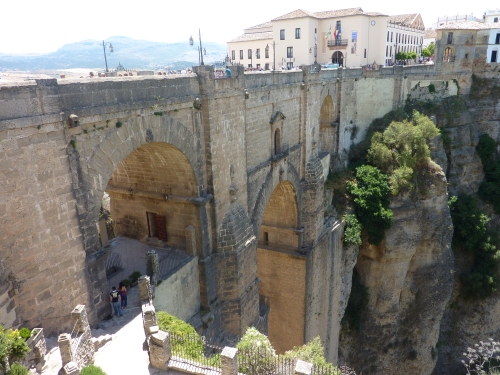 The bridge where the enemy were thrown off in their thousands

Yesterday we went to the famous Ronda, the town on a high plateau (744m) saddling a deep ravine; (remember, the one they tossed the enemy off only 80 years ago). Hemingway wrote loads of stuff when he was here – “For Whom the Bell Tolls”, “Fiesta”etc. Like Orson Welles he was a fan of the famous bullfighter Antonio Ordonez. Welles had his ashes buried on Ordonez’ property. Rilke visited the place as did Dumas and others.
But its fascination eludes me….it was interesting; the ravine and bridge dramatic, the odd Moorish remnant evocative, the notion of the uncorrupted hand of Theresa of Avila waiting in the church, weird and the 18th century streetscape, sometimes elegant.The bullring, said to be the oldest in Spain, was worth a visit in a gory kind of way but maybe it was the thought of those bodies hurling off the bridge into the chasm below that dampened my enthusiasm. Malaga ‘s most spectacular town and Hemingway’s muse didn’t float my boat.
The unrest I saw earlier in Madrid resonates accross the country, even here in this mountain town a group  demonstrates. 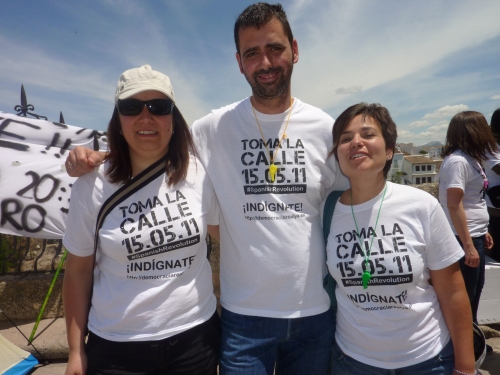 Demonstrations resonate even in Ronda

The Village – Gaucin
Today we walked up to the fort with wide views over the Sierras. The castle was meant to guard a narrow pass and the name of the town is Arabic for just that. 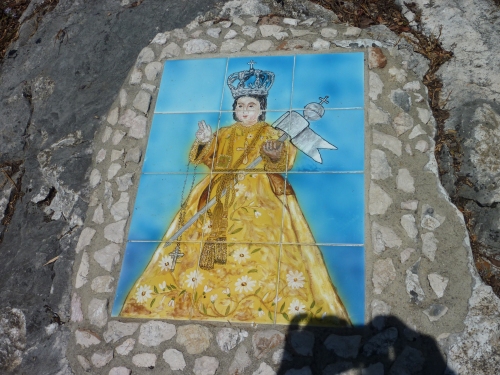 Popped into a Mass on the way back down the hill and the Hermitage of the Holy Child up the road has on display a few dozen changes of outfits for him.

The village has about 2000 residents and about a quarter are British (updated below) though like the natives not here all the time.

The deserted feeling comes in part from a number of empty British holiday houses and houses where the Spanish can’t decide which member of the family is entitled.

I saw some “kitchen paintings” in a restaurant and we visited the home of the Englishwoman who painted them. Her house on the outskirts of the village was evocative of the time I spent living in the Italian village with my family and other older Australian women. The painter said there are three English book clubs in town. What have we wandered into?

Imagine not suspecting the extent of English occupation and turning into a shop advertising bread to find that an upper class English woman is running a take home dinner service with the latest range of gourmet options. The chap who followed us in was heard to mutter “super” when he saw the daily menu. Oh! she was selling the Sunday Times as well. I am going back there right now to buy the last one since she said she would keep it for me because the chap who usually bought it, seemed to be “on hols”.

I suppose Europeans have always drifted across borders although it must be easier for the masses now .

More on the village 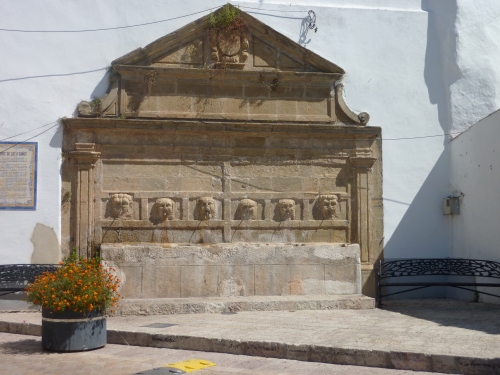 The fountain in the main plaza

It is the next day and the others went for a drive around the countryside. I thought it would be nice to be alone and to try to understand the rhythm of the village. It’s a Monday and there are more women in the narrow Calles, carrying shopping. About half are English.

I go down to the English gourmet number and have a delicious little chicken and mushroom pie…gives me time to cross- examine the owner whom I have christened “Prue”. She tells me there are about 2000 expats in the  Commune area most hidden in houses in the country near the village. She reckons this is a third of the total population with about 4000 Spanish. Easy to see the 3 book clubs then. And it explains the few up-market fine food restaurants. The lovely water colours of birds that dot the Calles with their detailed descriptions of habits and migrations are in English and Spanish too.
Prue sometimes does catering for some of the big “villas” just outside where she has to sign a confidentiality agreement. Doesn’t stop her reporting that Kylie, Kiera Knightly and Tony Blair have all stayed.

So it’s 1 o’clock and getting steamy. The 2 – 5pm siesta makes a lot of sense making it easy not to eat until 9pm. Wonder what that does to the digestion? Anyway… That’s the rhythm; it’s obvious that what you do in the early evening is open a bottle.

Localism – It’s the Same the Whole World Over
An English complaint about the town is that the local Council is too conservative …stopping progress, not helping produce a thriving art market.
The only reason the tapa at one place didn’t win the 2010 Tapa Competition is because the wife of the winner was on the selection committee.

The Andalusian Junta Advisory Committee is having coffee in the sun. How do I know? They have white t shirts or sloppy Jo’s or dust jackets all marked with the insignia signifying their importance.