Well I walked down a pretty average street and there it was framed at the end of a narrow street…. the famous Guggenheim.

It took my breathe away.  Soaring rounded titanium sheets catching the light as they flowed into each other and in front, a riot of coloured flowers, sits Jeff Koenig’s puppy.

There it is..at the end of the street..

Keonig’s flower puppy…there was one in Sydney once. What happened to it? 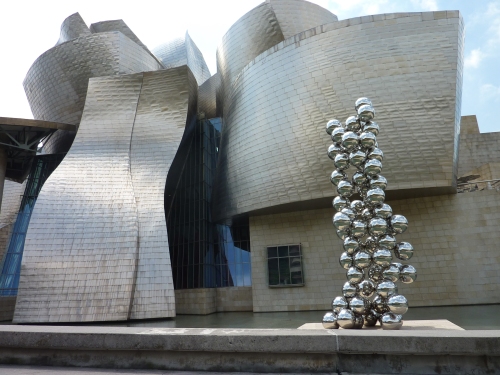 Frank Ghery is a genius

This is a world class building up there with the Opera House; viewed from the street or from the river its sculptural curves can be silver ribbons or the prow of a vast ship all folding into each other. Once inside the 55 metre atrium, light comes from a metal flower skylight way up high. There are curving walkways on the three floors above catching the eye and glass lifts taking it gently in another plane.

From over the river

Frank Gehry, you’re a genius. The town of Bilbao has not caught up to you yet. Too many ugly 8 story buildings from the 50s, 60’s etc.

The exhibitions too, I thought, let the building down. D.Daskalopoulos, a Greek millionaire’s lot was on loan…lots of installations. And the Guggenheim’s own European and American star pictures from 1949 to 1969. Somehow the White Rabbit Gallery in Sydney cracked the installations better for me; yep even taking the Damien Hurst into account. 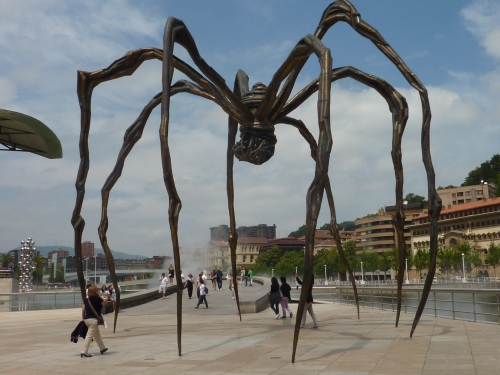 Even the spider outside was delicate

As the description on the Turkish artist and film-maker Kutlug Ataman’s webpage says:

Kuba is also the name of a shantytown slum, wedged between tower blocks and the airport in Istanbul. Ataman spent more than two years getting to know the wary, suspicious inhabitants of this illegal, mostly Kurdish neighbourhood, and filming them talk. Forty of these monologues are shown on 40 television sets, each old, portable, junked technological behemoth sitting on its own stand. In front of each TV is a sagging, second-hand armchair. The voices of the people of Kuba – young and old, women and men, defeated and defiant – are with us now. They smoke, they cry, they sing; the subtitles churn through their tales.

Each screen is a talking head, someone sitting at a kitchen table or in a cramped sitting-room, equipped for the most part with just the kind of old furniture we’re sitting on

Just to lighten me up…..there was a kinetic experience too. A row of us with headphones listening to the music of the period of the pictures. I bopped to Louis Armstrong singing “What a Wonderful World” and Tom Jones doing “Delilah”. Were we an installation I wondered? An affluent counterpoint to the dislocated of Istanbul?

Off to the UK tomorrow. Yep, right time to go.