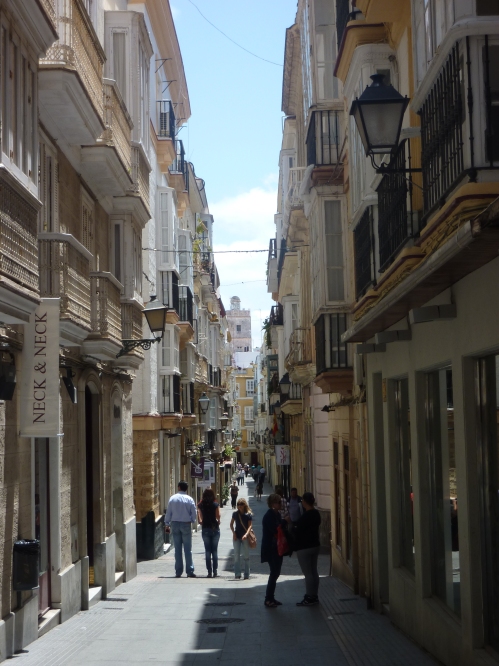 The charming streets of Cadiz

Cadiz is like the other Spanish cities in so far as it is clean and light with car movement minimized and good design showing through. It is a small town of about 120,000 yet it has different heritage walks clearly marked on the pavement like the trading one highlighting sites from when this city was the queen of the waves. 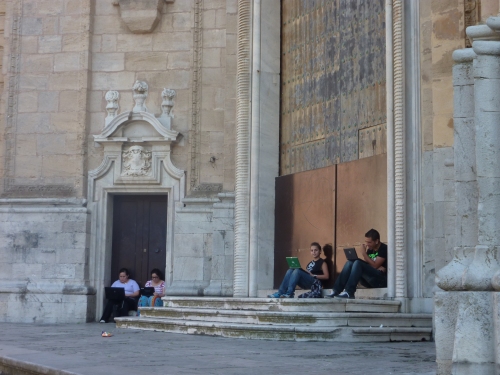 Students sit on the steps of the Cathedral using free Wifi

The same forward thinking Council is testing free Wifi in some plazas and has produced  “7 Hours in Cadiz” so that cruise linerettes can maximize their experience. Signs of anything before the largely 18th century makeover are hard to discern though.

It is said that Cadiz is the oldest city in Europe. IN THE 12th CENTURY BEFORE CHRIST (imagine that!) some of my favorites, the Phoenicians started to trade here with the local tribes. Wine, oil, dyes, and glass were traded for precious metal.

Later Hannibal took the region over and when he was defeated the Romans made this the SECOND MOST POPULOUS CITY AFTER ROME.

The Visigoths destroyed Gades (Cadiz) in the 5th century and then the Moors were here for 700 or so years before those right wing Catholics reconquistored. Isabel and Ferdie might have sent Columbus to America from here a few times but they presided over a bloody awful Inquisition. In Seville we saw the park where the executions were held and there are a few Museums of Torture about.

So there ……   history in a nutshell except for the bloody Spanish wars amongst themselves. I can understand why Goya and Velasquez were so dark. 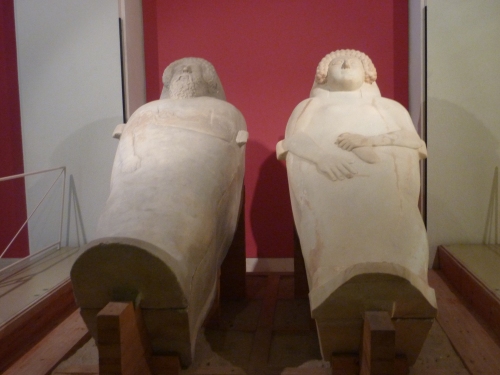 Phonecian sarcophagi could be 12th century BC. Imagine that!

There’s not a lot of anyone left to see except for the Spanish and my hunt for the Phoenicians had to be satisfied with the  2 sarcophagi to be found in the excellent little museum. About 10000 years old!

My fascination with the Phoenicians goes back first to Jezebel who introduced the god Baal to the tribe and for her trouble the husband, lover of Hebrew gods, had her beheaded. She went to her grave in full makeup hence the connotations with the name. The woman would not be bowed.

Then there is Dido, or Elyssa, who was pissed her brother inherited the throne; she married a rich man; tricked her brother when her husband died and fled with her mates to found the city of Carthage. She is said to have loved Aeneas and killed herself when he left to found Rome.

Enough history…. Most tourists in Cadiz are Spanish speaking and the place isn’t full of the ubiquitous tapas bars. Food is therefore better.

Some of those steps led to the Cadiz Museum where there was such a fascinating exhibition I had to research it later. Post IT City is a series of  photographs and videos from all around the world of people who temporarily occupy city spaces for example, “an industrial estate that becomes an illegal race circuit at weekends, the use of the building-site city for the adventures of explorer nerds, variants of the squatter phenomenon, the use of different wastelands for occasional meetings (nomad camp, rave), the conversion of a daytime campus into an night-time area of sexual transactions”.

As a one time urbanista I was grabbed. Planning vacuum meets art meets humanity. The exhibition comes out of Barcelona; there’s a book and web references. 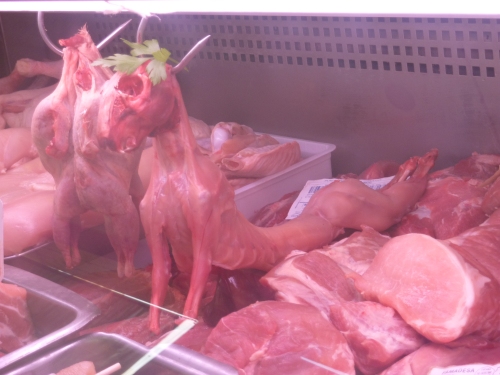 A rabbit goat? What planet are we on?

We visited the markets and amongst all the great food was this rabbit!