When I read back over this piece it seems stilted and formal, not my usual “voice”. I wonder why. Perhaps the scale of the history and the complexity of the environment have lead me to a distance caused in part by awe. I cannot be too familiar and breezy with such spiritual country. Sands in the hour glass. 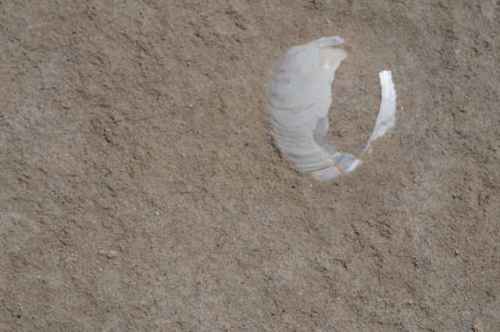 A special place, a place where aboriginal peoples have lived since the dreamtime….

As the National Parks people rightly say: “The vast spaces, big skies and earthen colours evoke a sense of endurance that reaches over the horizon to times long gone but with us still.”

Looking from the lunette back across the dry lake bed

More than 40,000 years ago, Aboriginal peoples lived around the shores of Lake Mungo in the south west of New South Wales somewhere between what is now Mildura and Broken Hill. The road in is unsealed and impassable after heavy rains.

Were people of the region ever contemporaneous with the mega fauna that roamed before the previous ice age? No-one knows this or the exact dates spanning human occupation. Debate continues. In 1969 the cremated remains of a woman were found near the dry river bed and in 1974 the skeleton of what we know as Mungo Man was unearthed; he was later dated at more than 42,000 years – perhaps the most important human remains in Australia.

Mungo Man’s remains were taken to the Australian National University, Canberra and now it seems he is finally on his way home. A journey that many believe could be the beginning of a major healing process for the first peoples.

A cutting through the “Wall”

How lucky am I? In October with friends I fulfilled a bucket list wish and visited Lake Mungo. To set the scene, the lake is now a dry lake bed in Mungo National Park. It is one of 17 dry lakes in the Willandra Lakes chain. The whole is listed on the World Heritage Register.

The Walls of China are a 33 kilometre run of loosely cemented sand dunes along the eastern side of the lake bed. In places the wind and rain has created fascinating dune formations. Westerly winds, rabbits and sheep grazing of earlier times have caused “breaks” in the whitish dunes or “lunettes” and in the sand crust, shell remains can be seen. Tools and bones have also been discovered, as have ancient footprints.

A fragment of the 33 k long “Walls of China”

Winds blow the sand westerly leaving lightly “cemented” outcrops standing. In a layer of this geology bones, tools, ovens, middens have been found. 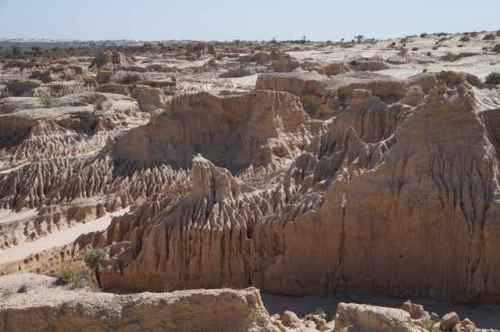 Somewhere in one of these layers, somewhere around this or one of the other dry lakes almost certainly lie more secrets about the history of this great continent and its first peoples.

Aboriginal guides take tourist off the peripheral boardwalks onto the lunette. When we visited, they were not there so we travelled onto the sand with a local guide. Who told us the dunes were moving westerly at the rate of 3 metres a year.

The back of the dune as it moves westward

This is a landscape in action, in action in the past and now, when it shows so much of what has and is happening.

On top of the dune

The lake bed which is now covered in bluebush or saltbush scrub, is home to emus and kangaroos while numerous other bird and fauna live in the national park. 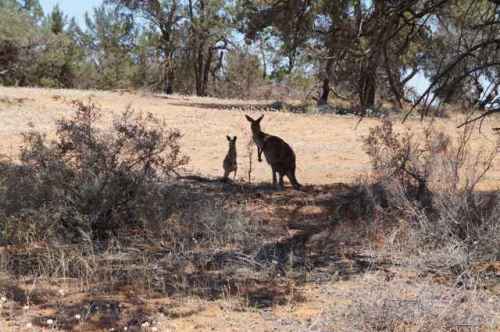 Roos are quite curious until you get close. Lots of mums and bubs about in October

On a second day of the visit we drove across the dry bed and around the outside of the lake. Here there are stands of Belah ( Casurina), rosewood, cypress pines, and my favourite, small forests of mallee gums

Near the smart newish galvanised tin visitors’ centre, the old shearers’ huts from the old homestead have been similarly refurbished to provide basic accommodation while a few k’s outside the park there is a camping site. 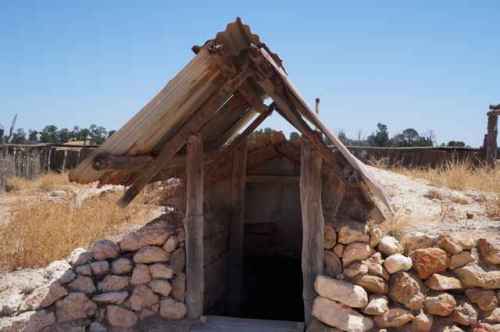 The old pastrolist families did it tough. When the temperature got too hot, they went down the steps in this dugout when it is about 10 degrees cooler.

Sheep once grazed where the park is; the large shearing sheds of the old homestead have been refurbished.

Being a soft, city person I opted to stay at the private Mungo Lodge. This motel –style lodge with a central dining room also has budget accommodation. The charming Glen and Bec who run it have recently relocated from the Hunter valley with their 3 children who study via School of the Air. 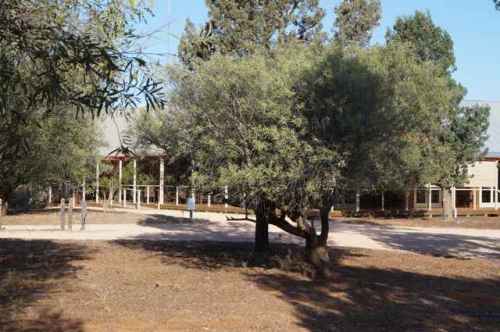 Can there be more to ask for than to visit an iconic site in the outback, be stimulated and overwhelmed by the great questions about mankind and the earth and then return to a glass of wine and a comfortable bed. 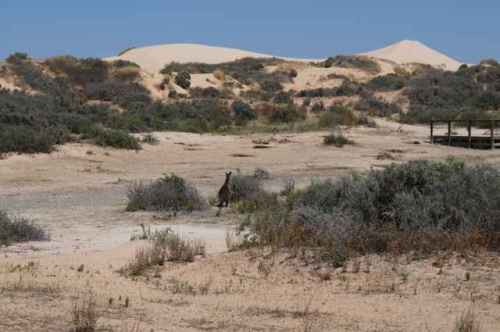