I’ve been so slack, taking so long to get around to recording last year’s trip. But here I am finally at the beginning of our trip to Portugal.

After Krakow, we flew to Porto and what a surprise. Porto, founded in 417 is the second-largest city in Portugal and has a city population of 287,591 with 2.3 million living in the wider metropolitan region.

To see layers in a city one needs to know something of its history and I came to Portugal with little knowledge. For this reason for my own reference I have attached a potted history at the end of this blog. I thank Tim Lambert who authored it.

While I always ask if I can photograph people, I admit I took this photo below without permission because I found the man’s face so haunting and to me, symbolic of old Portugal.

This town on a hill running steeply down to the Douro River hits the eye like a visit to an open air art gallery with a colourful cornucopia of tiling styles, decorated windows and wrought iron balconies covering the [mostly] four storey terraces.

From the traditional blue and white decorative tiles to green tiles brought from Brazil in the seventeenth century during the age of navigation, to modern apartments covered in brightly coloured tiles of only one colour……red, yellow, green, the tiling in the old centre is almost certainly one reason Porto was proclaimed a World Heritage Site in 1996.

Azulejo tiles, the traditional blue and white patterned tiles, were originally brought from Seville in Spain during the 15th century. Azulejos were very common in parts of the Iberian Peninsula dominated by Islamic expansion during the middle ages.

The standout examples of this wonderful tiling I saw were at:

Between 1905 and 1916 the artist Jorge Colaco installed 20,000 painted azulejos in this central station named for the Benedictine monastery that once stood here. Historical events were pictorially represented because even until 1916, the majority of citizens couldn’t read or write.

Education became compulsory in 1980 and in 1987, the role of the public newsreader became obsolete.

The most remarkable panels are those showing: 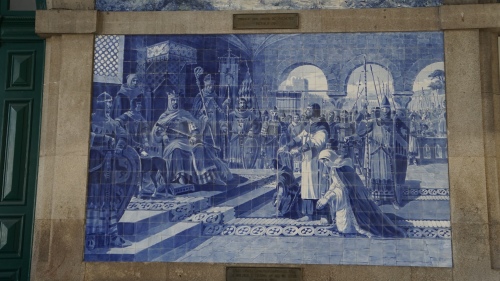 The longest bi-lateral Alliance in the world still in force is alleged to be the Anglo Portuguese Alliance which dates back to 1373 and consequently these countries have never waged war against each other. The marriage of Philippa of Lancaster to the King may have been to cement the Treaty. One of the stories of this union is that when Phillippa was riding into the city rose petals were strewn before her to mask the smells. From this it is said the tradition of  “red carpets” for special occasions grew. At least the Portuguese like to think so.

This 19th/20th century chapel has exterior paintings depicting the lives of St Catherine of Alexandria and St Francis of Assisi. 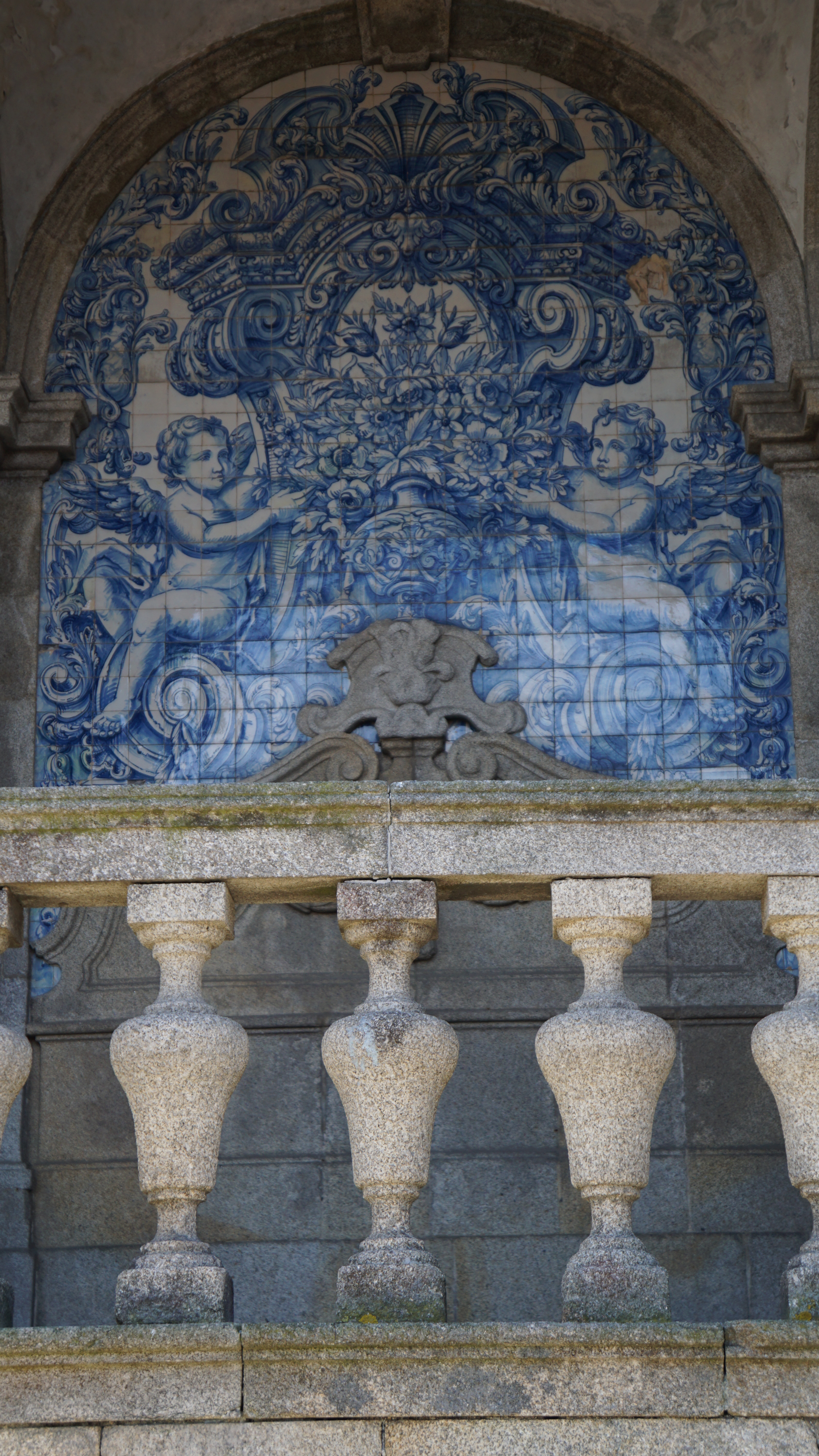 The old town tumbling down to the river is the lively part of town with its al fresco restaurants and tourist crowds. The World Cup playoff were on and crowds gathered outside TVs in bars to watch.

While some Portugal supporters were not so subtle. 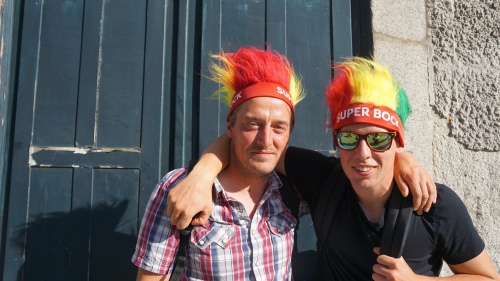 Bunting flew from apartments above the riverside mostly for Portugal 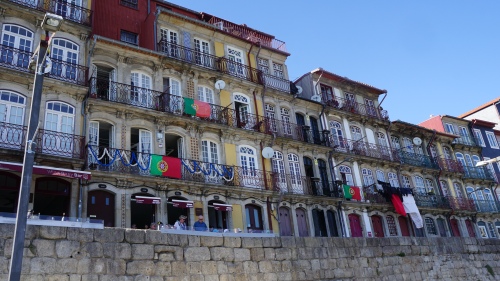 Buskers  are an integral part of tourism now and I found this father and son with their monkey, music box and marionette the most poignant of any I have seen anywhere.

The boy just concentrated on the book he was reading.

In the old town we visited the Misericorde which served as a headquarters for the Santa Casa da Misericórdia since the mid-16th century. It is now a museum to the memory of  those benefactors of the poor. Besides some fine portraits of same, it has a relic from the head of John the Baptist.

Also from the Misericorde is a fine view of the Cathedral.

The highly ornate church interiors of Porto are all that one expects from parts of Spain and Portugal. 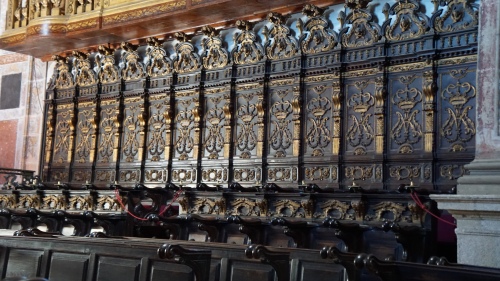 My simplistic mud map of the city has the railway station central with the old town running down to the river and upward on one side you can find the monumental Avenida dos Aliados with the town hall and other grand buildings. To the other side you can walk across the bridge to the Cathedral.

In the formal part of town there are long queues to enter the bookshop where J K Rowling took inspiration for images in the Harry Potter series. The crowds make it an unpleasing experience but interesting.

The grand square with its granite buildings hinted at a formal past. 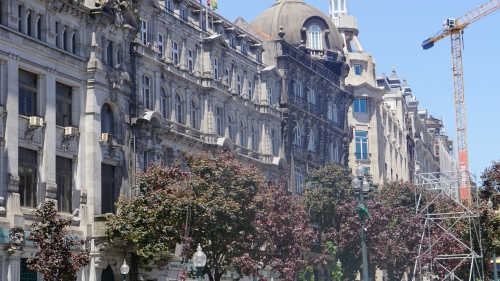 Clérigos Tower is the foremost undisputed landmark of Porto and a reference in the city’s history. Clérigos Tower opened its doors in 1763, becoming the highest bell tower of Portugal, with over 75 metres. 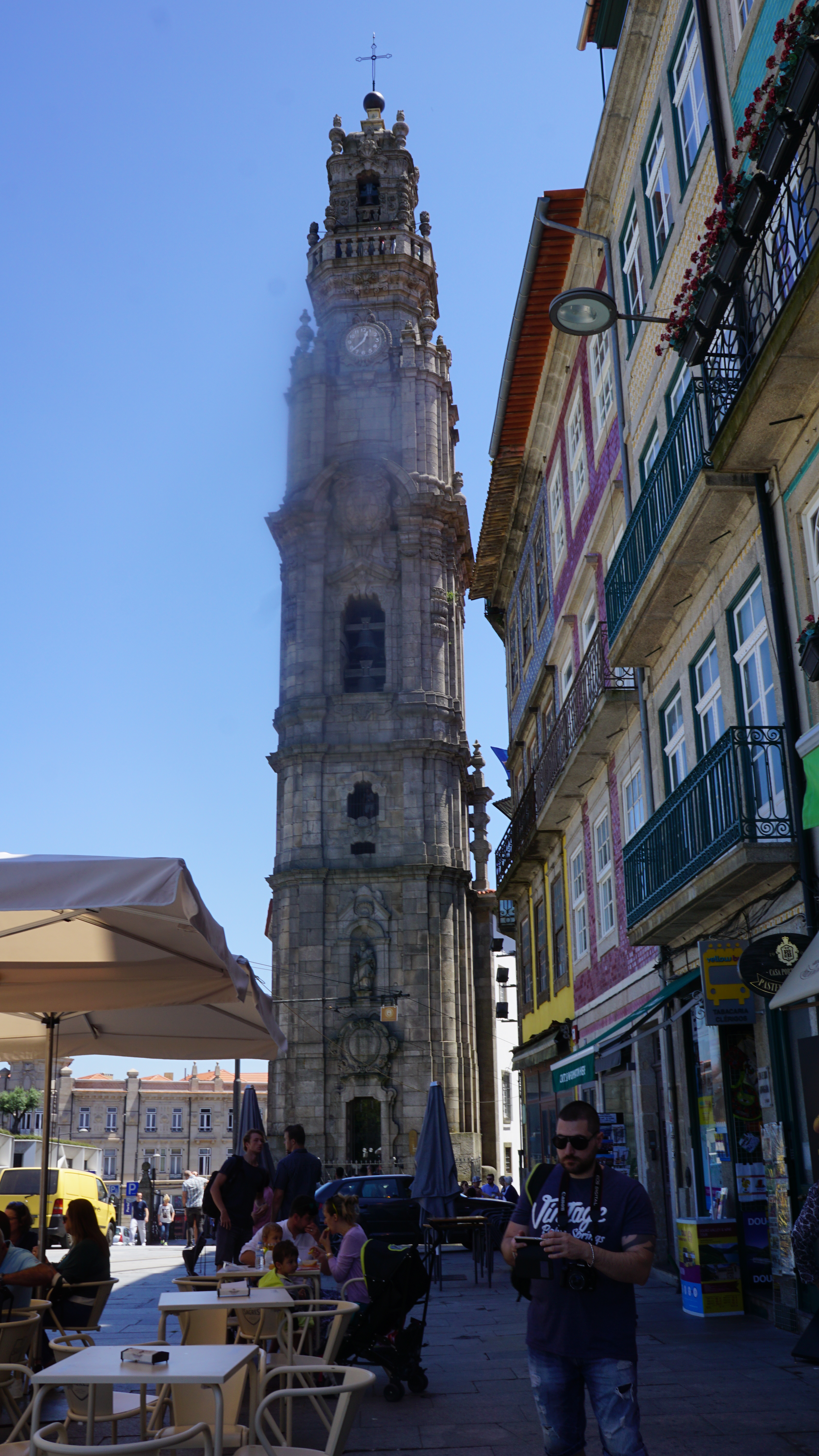 But my favourite part of the grand plaza is the statue of the Newsreader who was still operating in 1989 because of the high levels of illiteracy in the country. 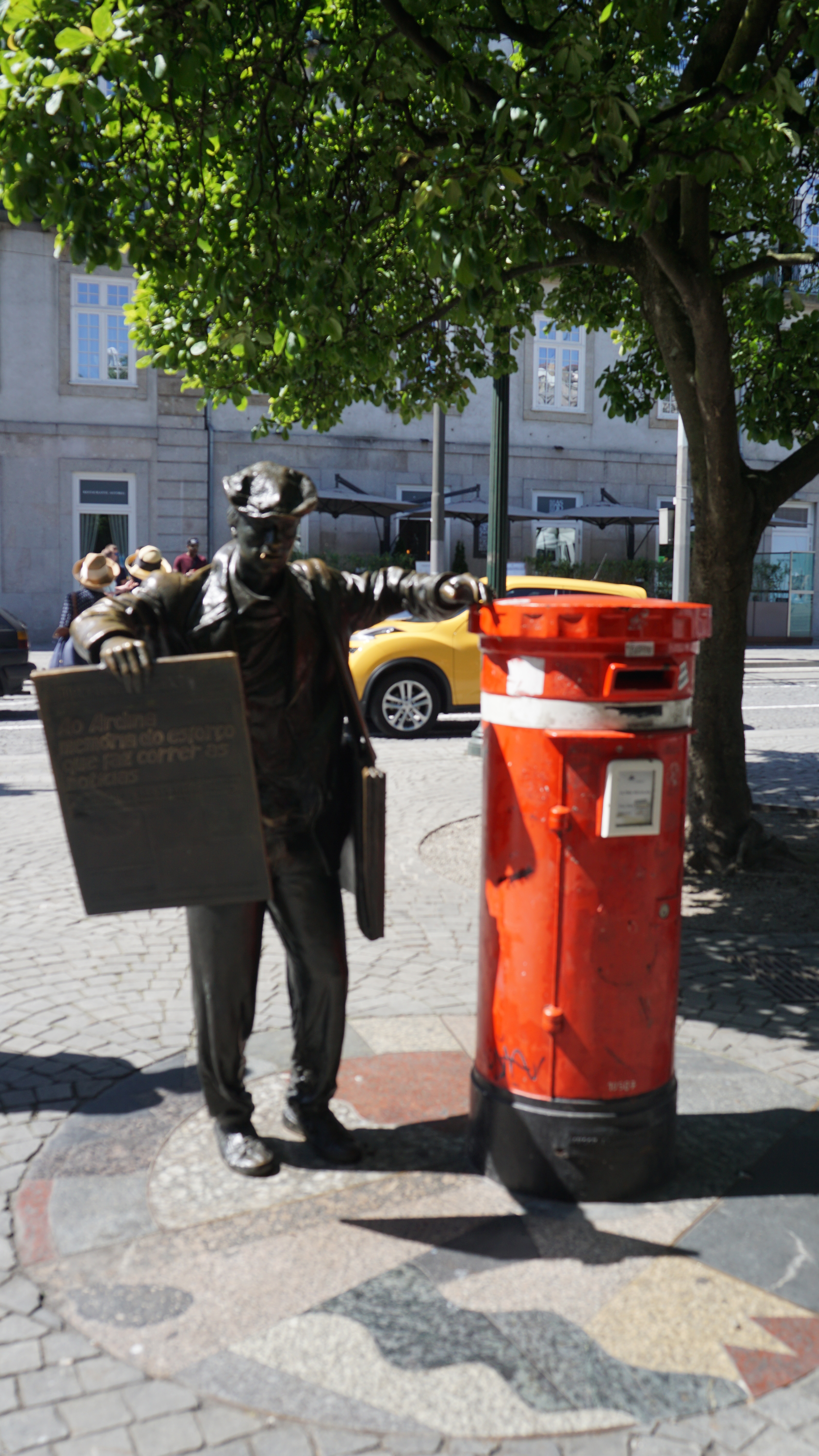 Across the river on the south is the town and municipality of Gaia. Twelve municipalities make up the metropolitan region, Gaia probably being the most famous for it is where the wine cellars or “caves” are located. These hold the port (and other wines) for which Porto is famous. It is said that there is more wine stored here than any where else in the world.

We took a day trip to the Duoro Valley. It was indeed pleasant but the fabled marvellous landscape seemed not much greater than other wine valleys along say, the Rhine. 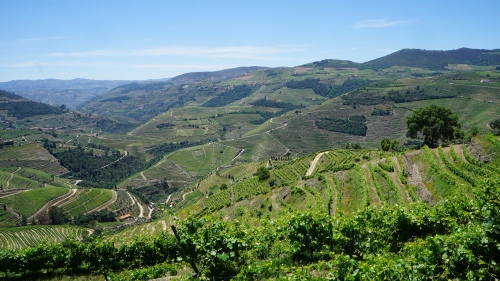 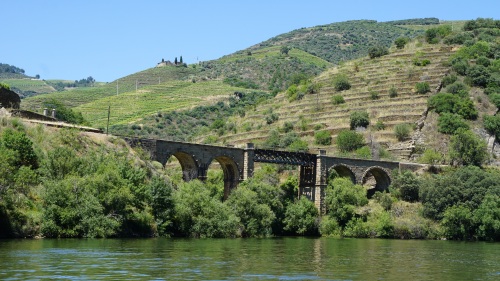 The first route stop was at the Sao Goncalo church in the town of Amaramte. The church has a commanding position overlooking the River Tamega and next to the Gonçalo Bridge.

A mix of Renaissance, Mannerism and Baroque architectural styles, construction of the church and monastery was commenced in 1543. There is nothing particularly outstanding about the interior, but it is worth a quick visit.

Gonçalo is alleged to have struck a rock with a stick, causing wine to flow from it for the construction workers building the bridge. He’s also said to have called out to the river when the workers ran out of food, resulting in fish jumping onto the river bank to feed them. Whether these things happened or not, they resulted in Gonçalo being named a saint in 1561.

The Duoro valley soil is rich in iron. Two billion years ago it was an ocean floor. Now 48,00 hectares of its 250,000 hectare expanse are used for wine. Of course various port styles constitute its famous tipple. Our guide claimed 12 of the top 50 wines in the world were grown in 13 Portuguese wine regions. There was the obligatory visit to a winery, the Croft winery, set up for tours and serve lunch to tourists. This winery was established in 1588 and is now owned by a Yorkshire family. 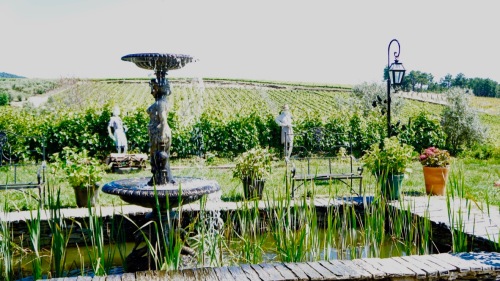 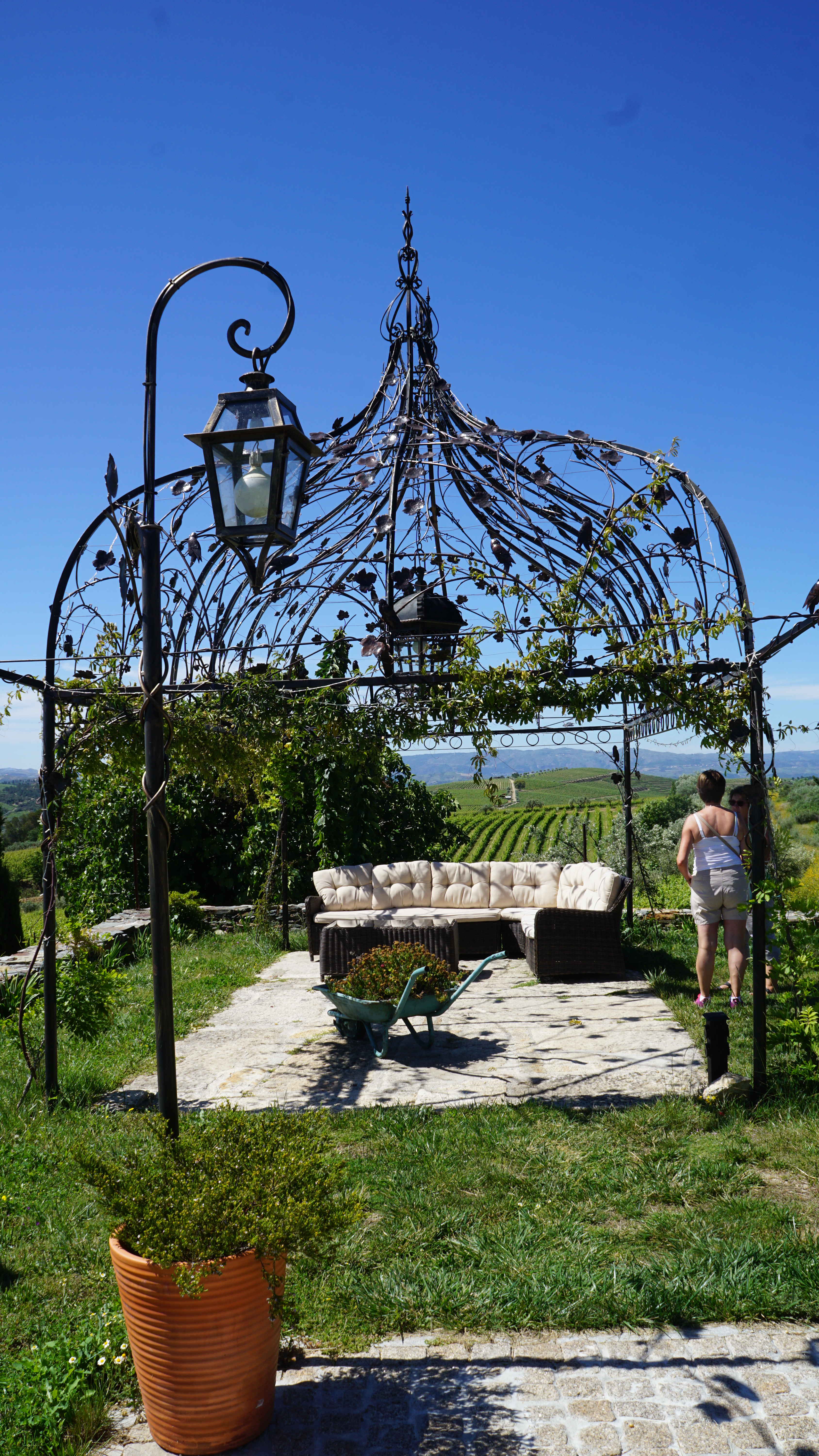 The wine trip was pleasant but my interest was more on stories from some smart young Americans. One, a teacher, horrified with a story about how her primary school class had to practise crisis evacuation in the event of a gun attack. Apparently the practice is  true to life down to the noises blaring from the loudspeakers and ways to avoid being killed. I gave thanks to live in Australia with our sane culture of no guns.

Today Portugal with its population of 10.8 million, is known for olives, wheat, wine and cork. Tourism is also an important industry. During the 2008 Global Financial Crisis, Portugal was on its knees. While things have improved with employment down to 9.7% in 2017, it remains a country that still depends on providing cheap labour for the rest of the world. There are 1500 shoe factories, including some Amani ones, in the north. Some Ralph Lauren clothes are manufactured here.

A potted history, thanks to Tim Lambert’s Short History of Portugal (www)

2,000 BC Bronze is introduced into Portugal

700 BC Celts enter Portugal bringing iron with them. Meanwhile the Phoenicians trade with Portugal.

600 BC The Greeks trade with Portugal

210 BC The Romans invade the Iberian Peninsula

1179 Portugal is recognized as a kingdom by Papal diplomats

1211 The first Cortes of parliament meets

1290 The first University in Portugal is founded

1386 Portugal makes an alliance with England

1415 The Portuguese capture Ceuta in Morocco

1427 The Portuguese discover the Azores

1488 Bartolomeu Dias sails around the Cape of Good Hope

1510 The Portuguese take Goa in India

1531 The Inquisition is introduced into Portugal

1703 Portugal signed a trade treaty, the Methuen Treaty with England

1755 Lisbon is devastated by an earthquake

1811 The French are driven out of Portugal

1820 A revolution takes place in Portugal

1828 Miguel becomes king of Portugal. He rules as an absolute monarch.

1834 After a rebellion Pedro becomes king

1838 A new constitution is introduced in Portugal

1974 After the Carnation Revolution democracy is restored