London had been a whirlwind, Berlin the continuation of an affair with the city. Then Helsinki? Finland? – calm, dignified, pleasant – occasionally bland? When I read this blog back it isn’t the normal easy informative, sometimes wry tale of my observations and experiences. This is more a recording of information, more lecture notes.

It may be that my responses were simply a counterpoint to the high of the previous fortnight, especially since I was now travelling with strangers.

I joined a small group tour in Helsinki – ah! group travel! I haven’t done much, mostly with the university to exotic places (Timbuktu, Libya, Syria). Group experiences themselves deserve at least a blog. Your instincts are constrained, your time pre-determined, the schedule rapid, the path pre-trodden, control out of your hands — a tourist not a traveller. Cocooned in a new world.

Luckily the group leader was not just charming but also erudite, learned and engaging.

History in a nutshell

To start understanding Finland (as much as one can do on a whistle stop, roller coaster tour) the briefest contextual setting is necessary. First it is a surprise that the official languages are both Swedish and Finnish although Finns comprise 93% of the population and Swedes only 6%. History explains that.

Although people have lived in Finland for 9000 years, the Swedes controlled the country from early in the 14th century until the beginning of the 19th century when Russia took over and Finland became the Russian Grand Duchy of Finland.

Finnish is a language with links to Hungarian and a smaller family of northern languages unrelated to Scandinavian ones. It was not written until the mid 16th century when Bishop Agricola translated the New Testament

The Russians granted increased power to the Finnish parliament in 1869 and the use of the Finnish language spread. However, by the beginning of the 20th century, programs of Russification were widespread. Finland finally became independent in 1917. Russia invaded in 1939 and finally Finland agreed an alliance with Germany. Consequently Finland ceded Karelia, 10% of its land, to the Russians

In 1995 Finland joined the EU and later adopted the euro. Imagine being a country of 5.4 million people living next door to a belligerent neighbour of 300 mill. Potential retaliation may well be why Finland does not upgrade its partnership agreement with NATO to full membership.

Here endeth the history lesson. I mention the history because its stages are written in the architecture of the city.

The first sign to greet you in Helsinki airport is this one; a reminder that many months of the year are very cold and very dark when a warming wine might be welcome.

Street life in the city 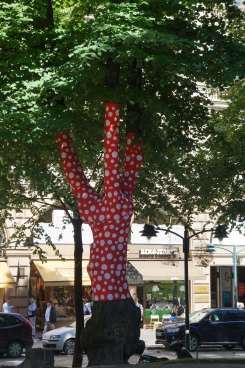 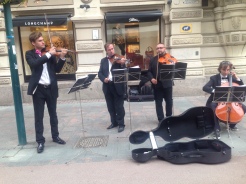 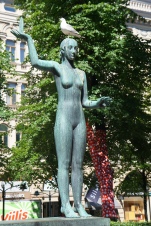 A city the size of Helsinki, 560,000, evokes thoughts of large provincial Middle European centres big enough for some signature architecture.

Sitting high above much of the city centre is the main Evangelic Lutheran Cathedral, a symbol of Helsinki. It was designed by a Berliner, Carl Ludwig Engel in the 19th century (completed in 1852) as part of the Empire-style-downtown Helsinki area. 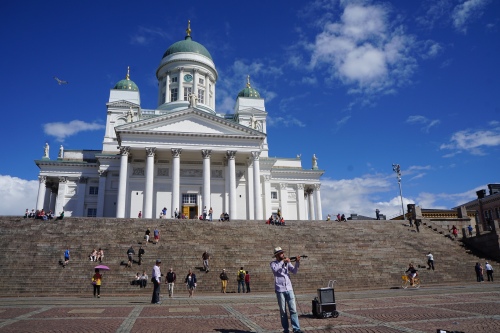 Below is Senate Square framed with buildings in the Empirical Grand Classical style. The pale yellow buildings also designed by Carl Ludwig Engel dominate it. He was the architect of much of the Square including the Government Palace, the National Library and the main buildings of the University of Helsinki. 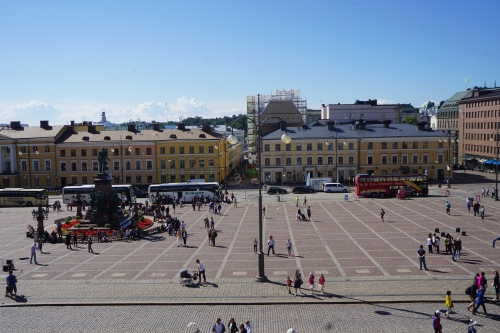 Completed in 1868 the Uspenski Cathedral is the largest orthodox church in Western Europe. With its golden cupolas and redbrick facade, the church is one of the clearest symbols of the Russian impact on Finnish history. 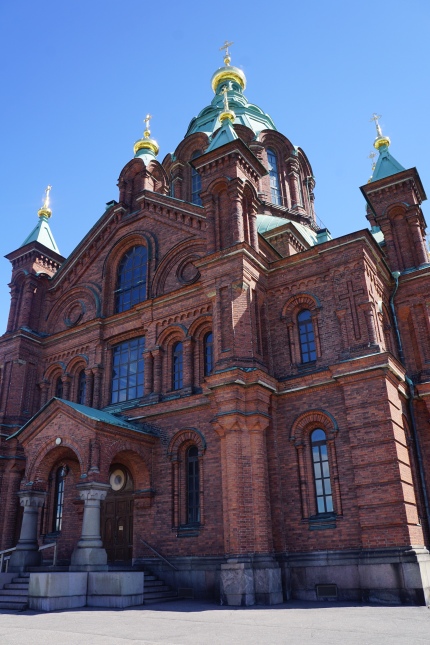 Art nouveau architecture was interpreted in Finland as its own form of National Romanticism. 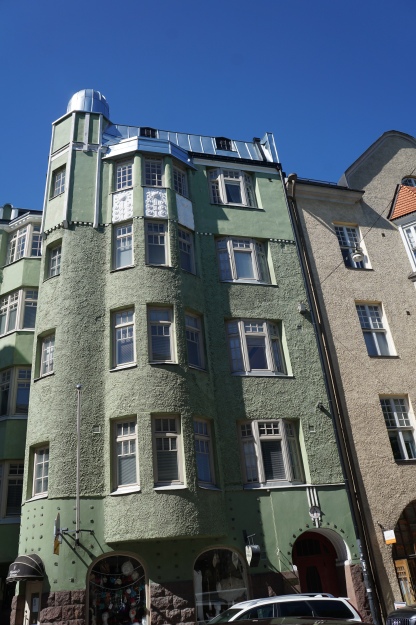 Some of the finest art nouveau examples include Saarinen’s Central Railway Station (1914).

The Aschan Café has some splendid nouveau features.

The Helsink University Library,whilst it has an interesting exterior is more interesting because of what it shows about modern Finnish architecture. It is built to maximise internal light and the fittings, as are those of a nearby supermarket, are made of beautifully turned and pleasing wooden shelves – not our ugly tin shelving. Indeed the Finnish reputation for good design shows in the details of so many of the buit interiors. 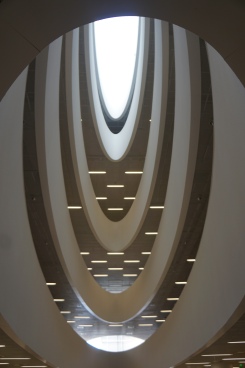 Other fine pieces of architecture we whistle stopped through were both in central Helsinki, the Church in the Rock, literally that, and the  Chapel of Silence in one of the city’s busiest squares.

At the  Seurasaari Island open air museum old buildings have been relocated here to show how people sued to live in previous centuries. 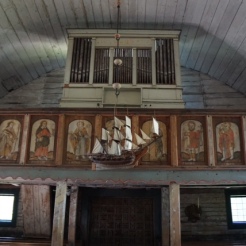 We were told a few times that Finland honours its heroes and those heroes are its artists and intellectuals. (Perhaps a long cold winter sets the scene for creativity.)

Perhaps the most famous Finn of all is the great composer Jean Sibelius. A visit to his home and an insight into his life is a centrepiece of a visit to Finland.

Sibelius and his wife Aino lived the 65 years of their married life at Villa Ainola part of the artists’ colony near Lake Tuusula.

Sibelius would wander in the countryside around his home and take inspiration from the landscape; he would compose work in his head and then return home and put it to paper. It is said Aino would be relieved to hear the sound of his working as she could sleep then knowing his creative struggle was resolved.

As he lay dying his music was played on national radio and filled the air of the villa.

A rose from the Sibeleus’ garden

Aalto designed a number of public buildings in Helsinki, the most notable being the while tiled Finlandia Hall, a palace of culture, now managed in a private/public partnership. The white tiling is evocative of the Sydney Opera House, not surprising as it the latter was designed by a fellow northerner, the Danish Jorn Utzon

We visited the home of, and homes designed by, Aalto. Mention has to be made of his wife, another architect, who kept the show on the road after his death.

Aino and Alvar Aalto’s home was completed in 1936. In this as in their other works, the young architects combined the modern and traditional. Furniture designed by the Aaltos won international acclaim by the early 1930s, and their home is furnished with their own designs. Pieces by well known artists such as Le Corbusier and Alexander Calder were part of their environment.

Below are views of the house from the back, the view of the garden and the light shades designed by the AAltos. 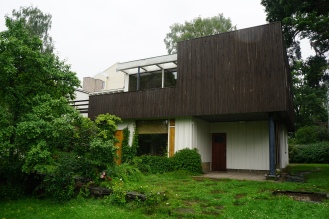 On the fringes of the city we visited another Aalto house, which was quite an experience. The Villa Kokkonen´s atelier was designed for music, commissioned as it was by Kokkonen, a composer. The host and hostess, pianist Elina and opera singer Antti, have taken over the house to lovingly restore it. Their tour exists of a meticulaous recital of restoration details by the excitable Antti, a splendid lunch prepared by Elina and then a musical interlude by both.

Another visit to a Finnish villa took us to the Didrichsen Art Museum. Once the home of private collectors, it now shows both Finnish and international art.

Below area 1964 Picasso and a henry Moore which sits in the garden.

Within the famous artists’ colony of Tuusula, stands the home of Pekka Halonen one of the most beloved artists of the ‘Golden Era’ of Finnish art. He like Sibelius,took inspiration from the landscape and painted both nature and people.

At the end go the 1880’s many of the leading artists of Finland built wilderness ateliers in the ideal landscape of the national romantic period. The fringes of Lake Tuusula provided such an environment as the pictures  below of the lake today show.

Meanwhile back in Helsinki, I cannot leave this blog without mentioning my favourite works in the the Ateneum at Railway Square part of the Finnish  National Gallery collection……

An amazing face on the “selfie’s wall”

Gallen -Kallela  painted Lemminkainen’s Mother as part of his Kalevala themed works. This is a mother and son story about the death of a warrior

And for light relief, the Kaarina Kaikkonen  used shirt installation in the courtyard,

Next we headed to Savonlinna for some music. It is worth noting that music plays a central part in the education system of Finland; some lower schools are music based while there are a number of music high schools

After a train ride north through the interminable pine forests, we arrived at Savonlinna, closer to Russia than to Helsinki. Here in the furthest castle in the north of the earth, the annual music festival was happening. 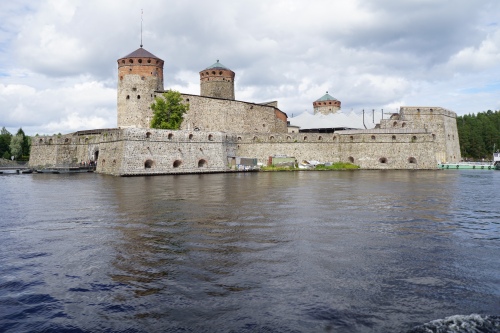 I was entranced by the symphony and understood perhaps for the first time how a great conductor can create wonderful music from what is perhaps not a world-class orchestra. 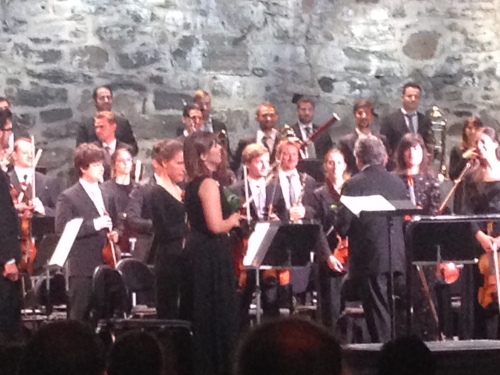 The second night I left the Opera Festival Choir and Orchestra performance of Don Giovanni at interval. Perhaps it was the closeness of the air inside the castle..