I dread birthdays. I think it’s because when I was an only child I was a star. Birthdays were days when wishes were made real. One year the whole class of (perhaps) 9 year olds was invited to don party hats and feast from tables weighed under cupcakes, sausage rolls and lollies at the local School of Arts. For its day, it would have been hard to top that.

Somehow books and records don’t cut the same style although, bless their hearts, my children knowing my birthday neurosis have striven to fill the void with occasional amazing treats.

This year was one to mark. (Although another childhood idiosyncratic behaviour is the refusal to share my age –a trait inherited from my mother.) Anyway something different had to happen. And it did – so my birthday was magic .

This splendid band was part of the procession that wound its way down the path singing Happy Birthday until it reached us. Our table was surrounded by candles under a sail on a flagged deck just above the sea. I cried with joy.

And then the chef presented the cake.

I have been to Bali, island of a thousand temples,  about eight times since 1969. It has gradually changed from an enchanting, free spirited, gracious adventure into a holiday resort for some of the worst examples of what western capitalist me-too ‘ism can produce.  And so much of the gentle Balinese Hindu culture has been corrupted.

Anyway in an attempt to find some of that old laid-back spirit I settled on Lombok, the  island of a thousand mosques just to the east of Bali. 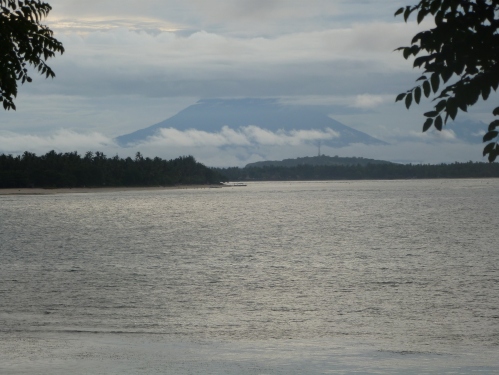 Bali’s volcano, Gung Agung, can be seen from the Lombok coastline.

The Wallace Line – the deep water fault line between Bali and Lombok is said to be a demarkation line for fauna.
But this monkey doesn’t think so.

I invited my three adult children for a week at The Lombok Lodge .

Here’s the pool and here’s the bar. Who could not be happy here?

Though there appears to be an another eternal calm embodied in this man fishing off a rock.

Three million people live here; on the eastern side it is apparently pretty fundamentalist Moslem but the growing tourist west was once part of the old kingdom of Bali. So despite a mosque in every small town, no signs of fundamentalism are visible.

We lived in a happy capsule venturing out only for a trip to the famed Gili Islands about 20 minutes away by motor boat and spent another day “touring”.

At a temple along the way, this couple was has having a wedding rehearsal. 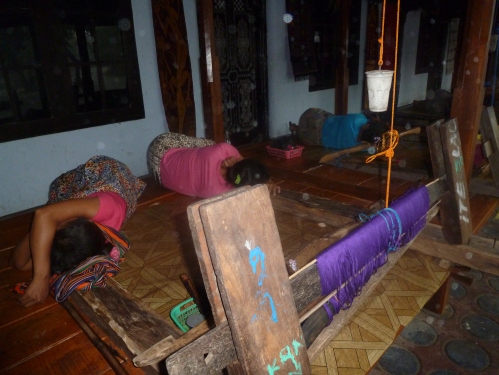 While the women who weave the famous Lombok Ikat were having a very sensible midday nap.

The Gilis are known for the turtles, the diving/snorkelling, the beauty. The big island is known as party central – we didn’t go there. Gili Meno, the smallest island has no cars and few people.  There’s a knockout little turtle conservation project being run by a local man.  Gili Air seems to be home base for the diving companies with restaurants fronting the beach and some resorts behind. 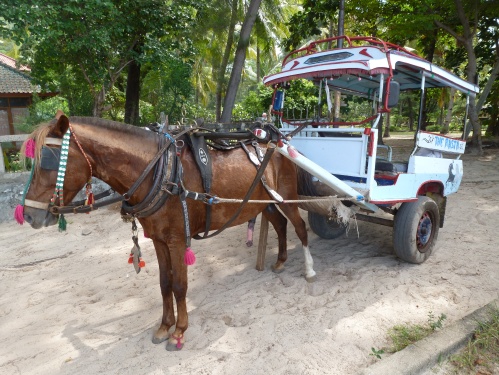 The only transport on Gili Meno

The turtle conservation project where babies are kept until they are 8 months and then released into the sea.

I am normally a traveller not a resort person though I have stayed at a few. But the star of this holiday was The Lombok Lodge. … only 9 bures, a chef who must be 2 star Michelin, the most beautiful staff in their black ninja uniforms, warmth after a Sydney autumn and an infinity pool and spa. What more could a woman, surrounded by the wonderful adults she has reared, ask for?

Tranquil beauty from the elegant apartment.

One of the delicious creations. A different and terrific degustation every night. Never have I tasted fish so beautifully cooked.

This wall is indicative of the attention to detail.

There is a new international airport and negotiations are afoot for direct flights from Australia so get there quick before the developers and the package deals. Down south, at Kuta Lombok the surf and sand are touted. At Senggigi on the north-west coast the main small, tired tourist area boasts a faded Sheraton.

Emerging from customs at Sydney, the first thing that hits you is the aroma of great coffee. The second stand-out is the tree outside my gate now deeply autumnal.

Back home, autumn was on full show.

p.s. A tip! One day, on the rocks, a painful sea urchin plunged into my foot. The spike looked like a long splinter but the bar ninja took control. Since it was shell, vinegar dissolved it with the help of a pounding with a small rock. I would have spent hours trying to tweeze it out to no effect.