As Australians we believe that somewhere deep, we connect to this vast empty landscape. Somehow like our Aboriginal peoples we identify with country. Although most of us cling to cities on the coast the desert, the scarps, the bleakness and the beauty all resonate in the psyche.

What joy then to cruise the north-west coastline and to be awestruck by the majesty of the cliffs, the drama of the waterfalls,  the tranquillity of the sounds and  simply the vastness and grandeur of this great land. 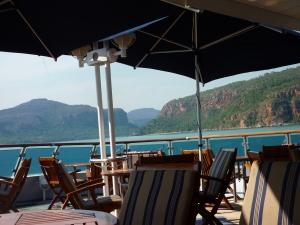 Such a comfortable expedition

Ten days on the Orion – with the mostly affluent,  first flush of the baby boomer generation… many 44 years married and 99% a couples story, a social composite I am unused to. Never mind. everyone has a back story and I am sure some will be interesting. I haven’t done this before and  it takes the few days at sea from Darwin to Wyndham (to call into Timor for international licensing credibility) to sort out the species.

Here is yet another examples of global labour going to the cheapest bidder but the woman who runs this cruise line has certainly found the secret to a contented workforce. What issues it raises! Lower paid work for the poorest whose families desperately need support or maintain Australian basic wages and provide a fraction of the service?

The sunsets were always special

Day 3  – Wyndham, Kununarra and all in between

Anyway two days in and we dock at Wyndham; the adventure begins. The port of Wyndham is skirted by mud flats but the unpretentious scattering of houses are selling for  half a million dollars such is the impact of the mining industry. A loquacious bus driver takes us along a road where the iron ore road trains pass every 20 minutes 24/7 and where export cattle trucks and nickel loads intersperse. At Kununarra a tired Cessna awaits.

All aboard the tired old Cessna…

We fly over the beehive Bungle Bungle massif, amazing cones of rock in the midst of a vast landscape. I fantasise I can see dinosaur footprints below in this 300 million year old land. Would I could see the rocks glowing in the sunset.Amazing that the Bungles were not “discovered” by white Australians until the mid 1980’s – testament to the scale of the country.

The Bungles Bungles from the air

Then we overpass Lake Argyle, storage for the Ord River Scheme, the biggest reservoir in Australia, bigger than Sydney harbour. We see  the deep stepped concentric cuts of the Argyle diamond mine where they have had to halt the digging ; they have gone so deep, the water table is fighting back. This mine produces 25% of the world’s natural diamonds.

A river winds  through sentinel sandstone cliffs 80 metres high… layer upon layer of red/ochre stone depending on the light. The sandstone is oxidised or blackened by algae from the waterfalls along the bank. We are here to see the twin falls either side of the bluff in a grand amphitheatre. These cliffs are 1.1 million years old and were once, before the ice ages taller than the Andes…as high as Everest. But over the millennia water has worn them to this grand canyon. 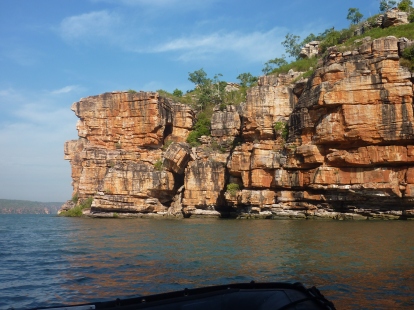 How can you describe the grandeur? 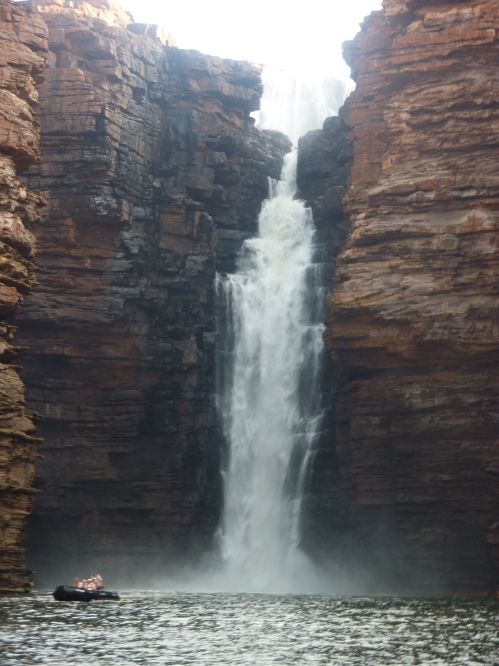 The hardy (not me) trek to the top and swim. Tucked into a cliff, the crew had set up a boat with champagne and croissants. Our zodiacs motored up to this floating indulgence before speeding us under the waterfalls for that experience.

Today was an experience that captures me still. On Jar island we climbed a steepish escarpment to three caves with examples of Bradshaw Art. Cave paintings that could be older than 20,000 years. Joseph Bradshaw first recorded this art style in 1891 and it has been named for him although the Aboriginal people of the Kimberley call this style Gwion Gwion. There ar estimated to be 250,000 such caves in the Kimberley but no resources available to document and preserve these national treasures. 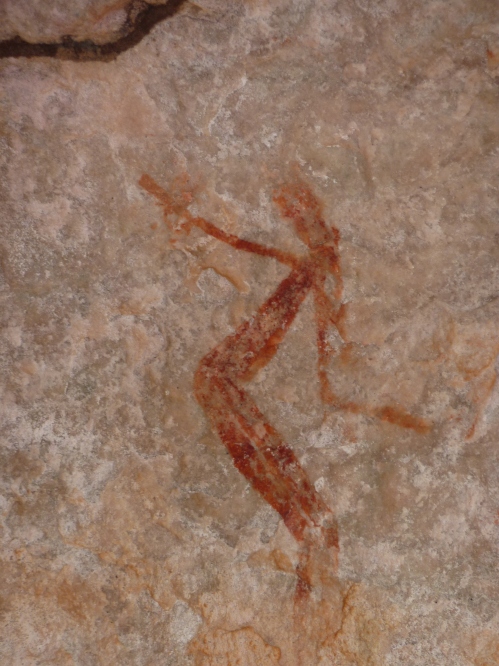 So like the active figures of Africian rock art

It blew my mind that we could sit in these caves with these historic treasures; photograph them, even touch tem and the only constraint was deep respect for place. The art, mostly tasselled figures with a few prehistoric animals are so stained into the rock that there was no suggestion that they were endangered by the groups of travellers who passed through. A far cry from the cave painting of France which, when I visited 25 years ago, were not open to the public and viewers were only shown parallel artificial caves. 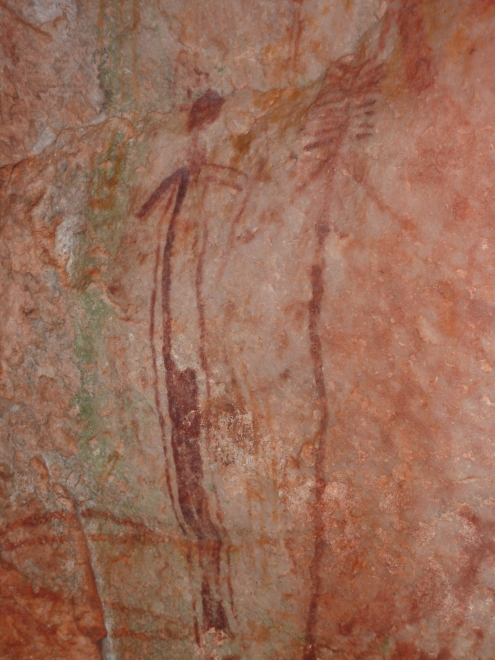 There are said to be 250,000 of Bradshaw art in the Kimberley

No-one knows who made these drawings… some bear an identical resemblance to rock art found in Africa and some of the ornamented dancing figures have the feeling of Javanese puppetry. Would I had more time to know…like so many things. One depiction is of pre historic  pygmies. Here also is the earliest halo figures of later aboriginal art.

The rocks  are about 1.8 million years old.….pre fossil like yesterday. Life was lived here in the Pleistocene age. The question is raised in the debate on the genesis  as to whether the Aboriginal people are from one genetic stream or from many.  Once there were people in the north of Australia at Kuranda (documented in 1938) as pygmies. At Yawijibaya there were a people 7 feet high.

The eerie yet familiar rock art resonated as did the beautiful stillness of another beach that afternoon. We zodiaced to a beach and trekked across the salt pans to a WW2 plane wreck but it was the isolated beauty of the beach replicated thousands of miles stretching around the Australian coast that makes it almost too much to comprehend.

The helicopter takes off from a small beach and lands there later in the grass after the tide has come in. The pilot looks like Sal Mineo and spends six months of the year here. Who would have thought there were enough tourists in this remote area to keep four pilots busy?

The 30 minute ride serves to again underline the vastness of the country and the scene from the sky is reminiscent of so much painting from aboriginal art to Fred Williams. How did they have this aerial view? I walk to the three level falls and then  dip into the cool river above.

Mitchell River National Park is 115,300 hectares  in some of the most remote and inaccessible country in Australia. It can’t be too remote though. I run into two walkers on the path… a three-hour walk  from the campsite they tell me. The Aboriginal people were evacuated from the Mitchell plateau during WW2 (for their safety!!). But now some of the traditional land owners have returned and have been instrumental in drawing up the management plans for the new national park. 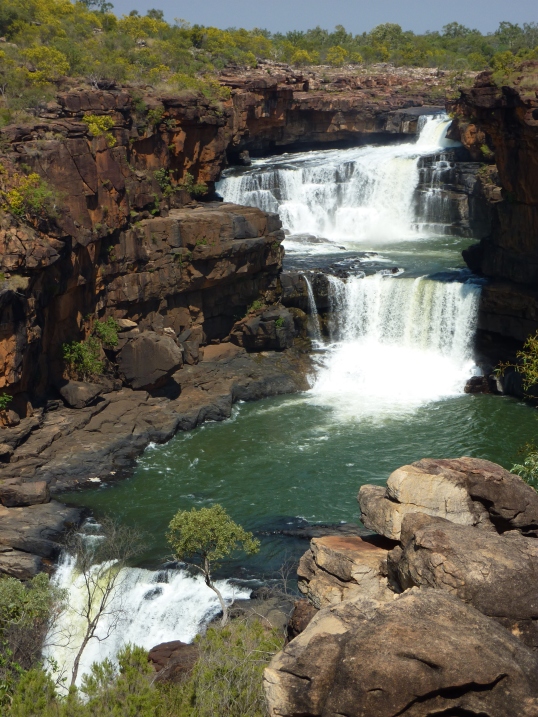 The afternoon is spent in the zodiac meandering up creeks of mangroves in that eerie still  water. Strange to see these mangroves fringed by the always present red cliffs. Only a few crocs to be seen and then almost encircled by zodiacs. How we are drawn to primeval creatures! 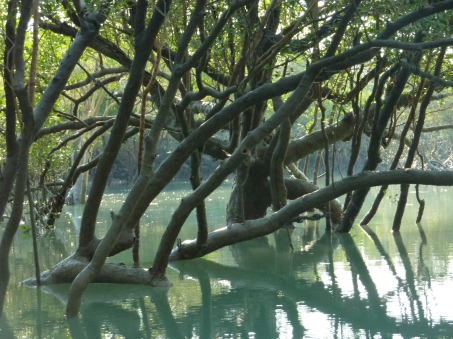 The beauty of the mangrove 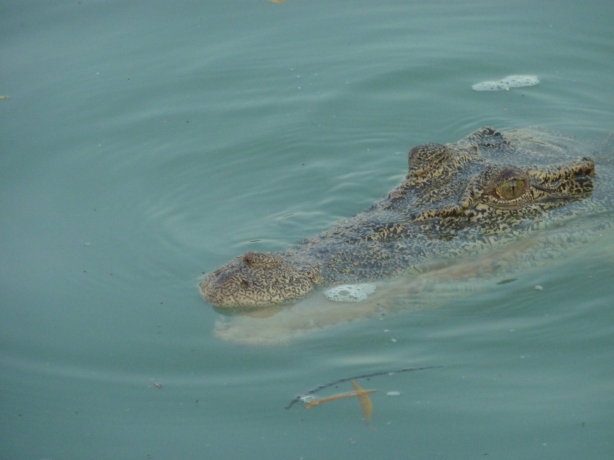 And the ever present croc

Montgomery Reef is 400 sq. ks  and the top of the reef is exposed only at high tide. We set out at dawn and travelled for a few hours in zodiacs to watch the reef emerge from the sea with the waterfalls pouring off it. Because of the tides we are able to see it emerge about 10 metres and although people excitedly saw extensive bird life and turtles, I seemed to miss most of the momentary sightings. Back to the ship with an enchanting picturesque visual of an umberella in the sandbar and staff waiting with Bloody Marys. 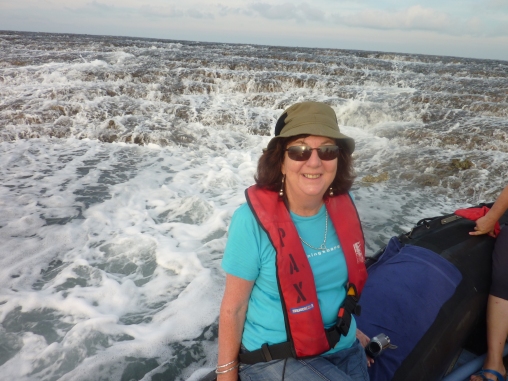 But civilisation was never far away

In the afternoon we visit the cave paintings on Raft Point and here are the representations of  the Kimberley’s the major image,  the heroic Wandjina, creator of the clans. Each clan has its own Wandjina. Tradition has it that a member of the clan must come back and “freshen up” the Wandjina of his people. 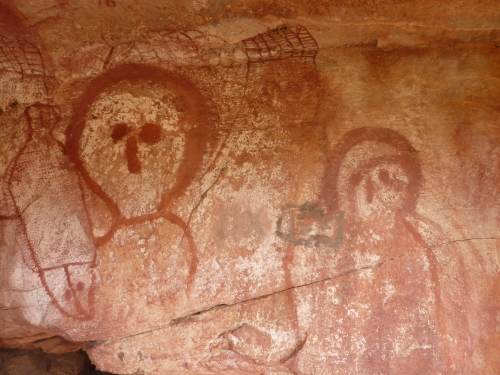 While others power ride their zodiac through the vertical falls I go on a fishing trip…what fun. First I am touched by the care and concern of the staff helping an elderly man, mostly wheelchair bound, in and out of the fishing boat. He has the best catch although I snag a metre long reef shark but can’t land it. We let all the fish go.

After we spend two and a half hours motoring the bay and its nooks to see the amazing geological forms where the Kimberley about 1.6 million years ago smashed into the continent and the tall sandstone cliffs gradually went on the vertical . I am surprised at how little bird and animal life there is but it is just after the big wet and apparently too early in the seasons.

Here are the vertical falls 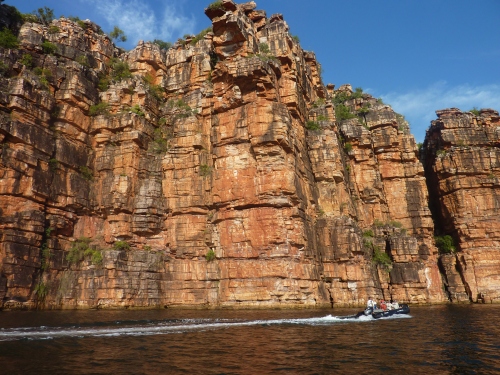 Although we are 3000 kilometres from Perth, the seaplanes fly in and the guys who run the speed boats  through the falls live on a houseboat here. There seem to be about 15 charter companies coming in and out of these rivers and bays in the season.

At the end of the day

I sit in the glassed 6th floor front lounge at a white tableclothed table musing over a delicious afternoon tea. Gracious green and sandstone folding hills are pure National Geographic. What more could one want? Majestic nature and elegant living in the one package.

I cannot believe how efficient and pleasant the Filipino staff are. Clearly the company has an amazing human resources program. The woman who owns this company should run Telstra. This trip is planned /managed/ executed to a T.  Lectures before or after every excursion; efficient pleasant transport to the points of interest; some meals are up there with the best.

Day 9 –  Yampi Sound and its islands.

We took the zodiac around the sound and while the vistas are broad and beautiful, I was conflicted by the mining operations in this stunning landscape. Cockatoo Island contains one of the world’s richest ore bodies. It yielded an average purity of 69 % (1951-1986); with some  ore content at 97 %. Both Cockatoo (in 2000) & Koolan (in 2006) Islands have recommenced mining operations.

In the afternoon was swim time at the Crocodile Creek waterhole. Margaritas in the clear shallows, small waterfall to the rear. If there is a heaven, then I am sure it will  contain a version of this place. On a dull winter’s day or at a time of stress, I hope my mind’s eye  can conjure up the visual joy of that experience.

Heaven… the swimming hole and margeuritas!!

What a gem of a town. As a former planner and urban manager, I am chuffed by the development control plan which has produced a town centre that pays homage to its history and which to date seems to have kept rapacious development at bay. 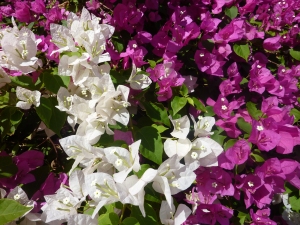 As I trudge around the art galleries, I meet, in their proprietors, the most charming group of people I have met for a long time. Other people,  in response to my questions about directions go out of their way and drive me there. As they would erroneously claim for them selves in Byron Bay, this place does indeed seem to have a special energy. Especially sipping a cocktail at sunset overlooking Cable Beach. And catching my breath at the unexpected collection of Syd Nolans at the cable beach resort. 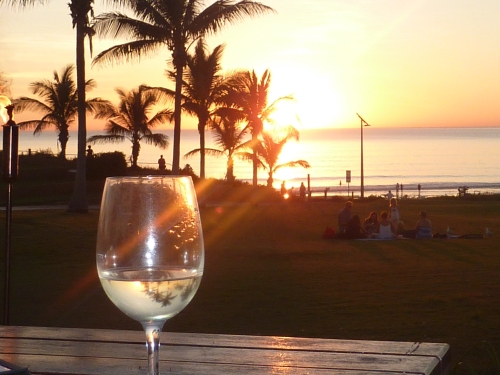 Time to go.  Broome airport…white corrogated iron with green posts .. fans… pitched latticed roof over a  central court shades of Somerset Maugham. There is a wishing well… I would wish to come back.