The mudmen eerily silent creep across the field

It was 40 years since I had been to Rabaul on the Gazelle Peninsula of East New Britain, Papua New Guinea. Then I was a very young journalist, not long married with 2 small babies, one of whom I took with me. We went for a month or so to visit his father who was one of a large number of Sydney barristers briefed by the Australian government to appear for the 12 Tolai men accused of murdering the white District Commissioner, Jack Emanuel, over a land dispute. But that’s another story some of which I wrote for the now defunct Bulletin magazine in 1972. This week I went back to visit a friend volunteering in aid work and to enjoy the annual Mask Festival. 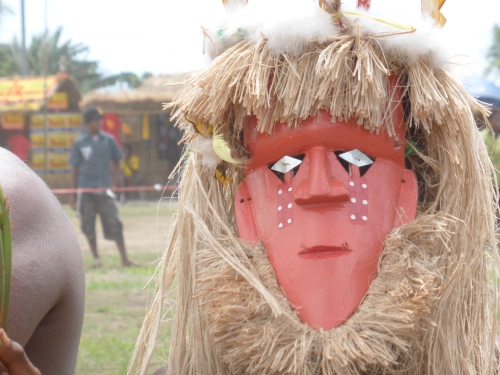 The actor is unmasked

Papua New Guinea was my first overseas experience. I still remember the exotic musty smell infused with frangipani and some spice that assailed me together with the exotic heat as I walked towards the rudimentary airport. The new International Airport at Port Moresby isn’t too bad and that wonderful perfume seems to have faded but you have to be on the alert at the domestic terminal. There are no loudspeaker flight announcements and the departure board has an idiosyncratic view of what is happening out on the tarmac. When you finally deduct your flight to East New Britain might be waiting, the covered walkway to the tarmac has no numbers denoting the advised bay. This haphazard organisation is a harbinger of how things are in the country.

I arrive in Kokopo, the new administrative centre 20ks from Rabaul which was basically wiped off the map in the 1994 volcanic explosions. That night it’s off to a fund raising fashion parade of second hand clothes at the Ralum Club for mosquito-proof bassinets for new borns. There are some 3,000 babies born in the region each year and most return quickly to the village.

Standards are to be maintained at the Country Club

There are maybe 200 ex-pats in town split between commercial and aid personnel and a handful have organised and attend this night. About 100,000 nationals live in Kokopo and its hinterland. Day 2 In 1994, the smallest volcano Tavurvur, fringing Simpson harbour, itself a caldera, blew up as did Vulcan a new crater that emerged in the 1937 explosions. The town of Rabaul was decimated, flattened, covered with hot ash. The administrative centre, the businesses and most of the town were moved down the road to Kokopo a safer 20ks away. The suburb of Malaytown in the direct path of the lava is now just acres of dried grey ash like some grey desert. 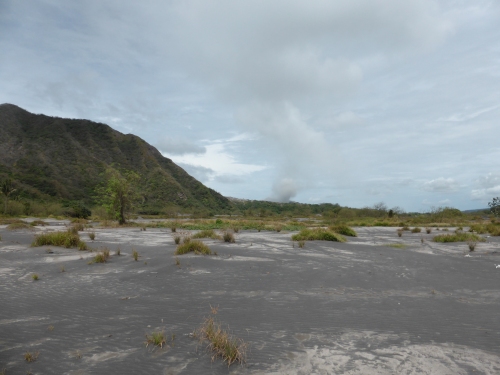 A suburb of Rabaul, Malaytown, once stood in this ash desert.

It was heartbreaking to see.  I remember, a neat open charming tropical town. Now all that stands, apart from the port, is the old Rabaul Hotel, the eerily semi abandoned New Guinea Club with the adjacent Admiral Yamamoto’s bunker, and the ghostly Travel Lodge Hotel.

Once the height of style; now rooms are rented by the hour at the old Travel Lodge

When I stayed here the Travel Lodge was THE best place in town now its rooms are let by the half hour to the 1 Kina (50cent) Meris who pick up some trade from the Chinese tuna boats pulling into port.

From the Observatory, the now flattened Rabaul town area still has that tropical magic although Tavurvur smoking in the background stands testament to its destruction. 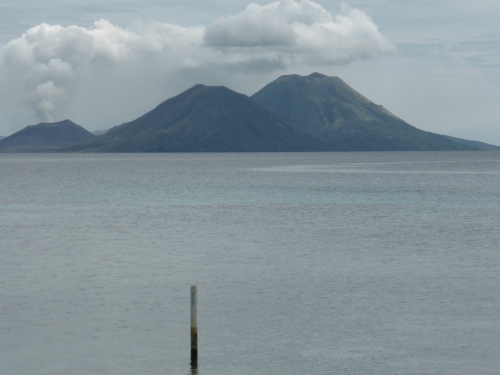 Here are the mother, the daughter and Tavurvur

In the afternoon, it was off to Kolobond Graveyard, the football field, to see the local team, the Kurias (meaning Earthquake in the local language Kuanua) beat a team from the Papuan gulf. These people love their football and the Kangaroos will play here later in the year as it is probably the safest place in PNG. 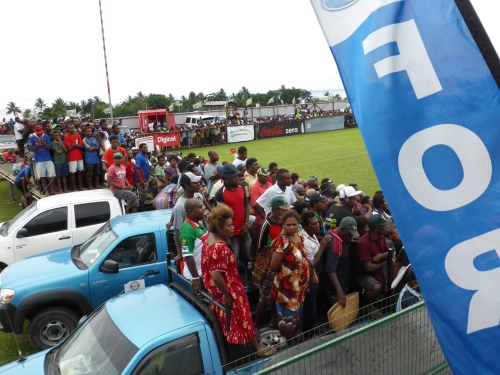 The back of the ever present ute makes a great grandstand at the football.

Day 3 Out on a canopied banana boat to see the dolphins. These open boats, without the tourists’ canopy, but with outboard motors are the common transport mode between and around the islands with trips to New Ireland taking only 3 hours on a crystal flat sea! 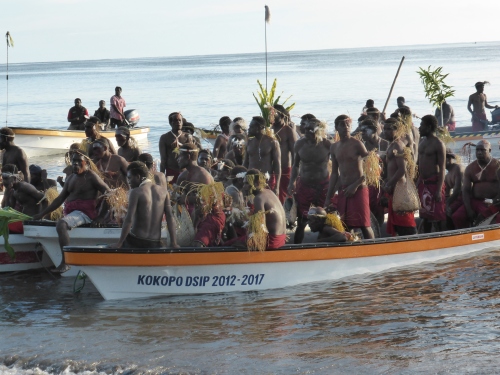 These are the banana boats bringing the tribes from the Duke of York Islands to the mask festival. These boats are the main mode of transport around and between the islands. Lives can be lost in rough seas.

I met a young missionary who with her husband and 4 children aged from 10 months to 12, was justifiably nervous about their trips to and from the village in remote New Ireland where they had lived for 10 years. Sometimes the sea was rough and could take twice that time. Back to the dolphins. Some people swim/snorkel with the 200 or more in the pod but I felt more comfortable on dry board taking dozens of pics of the sea where they had just disappeared. It would be easier to catch a fleeing leopard than to photograph a dolphin well. 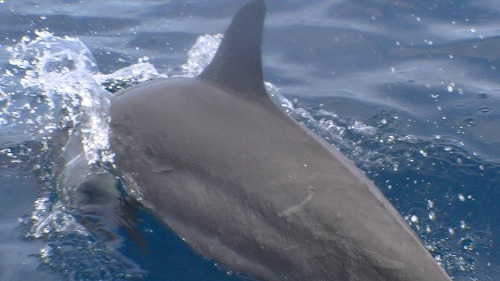 I salute those who can take great dolphin pictures

Then we motored around the harbor shores- lots of rusting wrecks of huge hulks destroyed by the volcanos; the smoking crater of Tavurvur and the old lava where villagers were foraging for megapod eggs; local people waiting in boats to sell produce to crew on the big trawlers; views of the tunnels where the Japanese stored their materiel safe from air raids.

The 1994 eruption destroyed the boats at anchor in the harbour; squatters live on one of these

One hundred and ten thousand Japanese were stationed here during WW2 and apart from the tunnels and the Admiral’s bunker, the rusting tanks and guns in the museum garden are all that remain. Day 4 The town of Kokopo is a linear stretch of trade stores, banks, hardware shops, agencies of the practicalities of life. The majority of housing is up on the hill above the town and there are five resorts of various levels of sophistication along the coast. One even has a cappuccino machine and all charge like a wounded bull for very ordinary food. Here the basic wage is $1.50 a day and 20% are in the formal economy. Ausaid has financed a very fine local market and the fruit and vegetable on sale are wholesome in a monotonously green/ brown way. 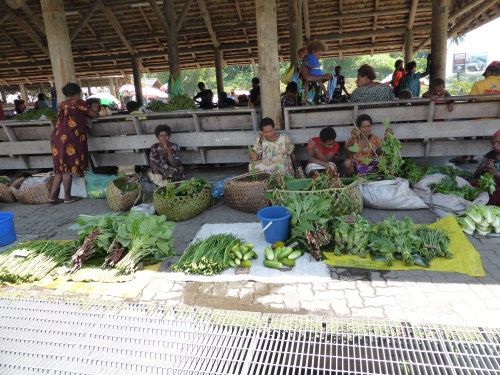 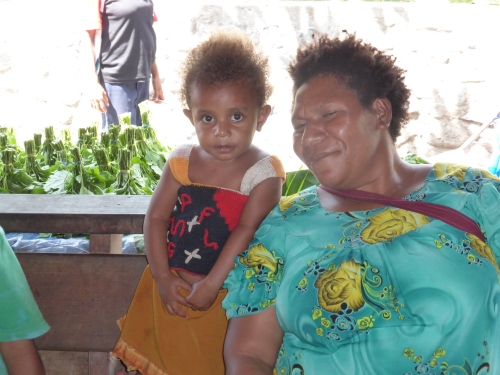 And some of the gentle smiling people there 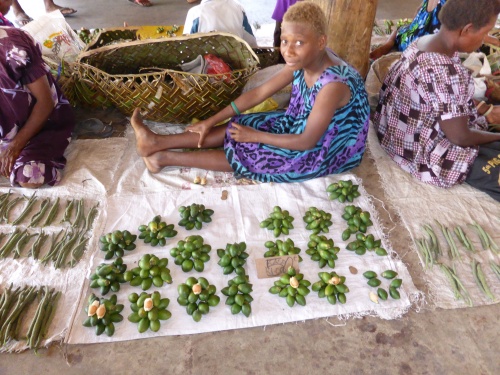 Where ever people gather, you might find the betel seller

The Kokopo museum made me want to cry…. empty shelving, layers of dust, faded exhibits. Were I here longer I would want to impose or at least, dust. Days 5 and 6 The 19th annual Mask Festival!! We have watched the grass huts go up over the past days and all is ready, except the electricity is not working too well, the passes aren’t ready, and the side gate has to be kept locked as the security guards seem to be letting friends in. It starts at dawn with the clans from the Duke of York islands coming across the water drumming to start the festival, the Kinovai.

The Tubuans, not usually viewed by the women, are brought across by boat from the Duke of York islands

One of the organisers mentions they have paid $250 to have the beach cleaned for the event but no one seems to have done it. (More on the PNG laid back approach to organisation and life’s vicissitudes in another post) The festival ground has a roped off area where various tribes come to showcase their traditional performances. I estimate about 40 tourists among the Nationals, the majority from Japan and Germany. Most have huge camera lenses and the Germans seem oblivious to the views of others as they stand along the front of the stage in pursuit of the perfect photo. The pictures describe the visual feast better than I could. There are many for the experience was rich. 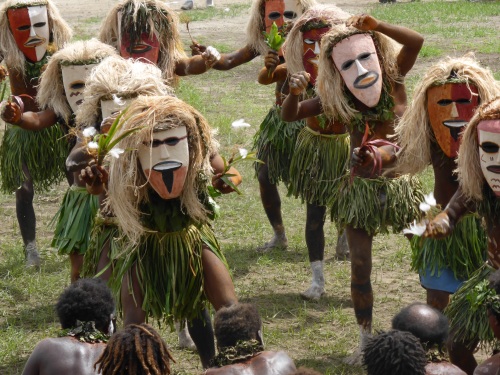 These were some of my favourites

These men were pretty good

Then there was the cassowary/emu dance 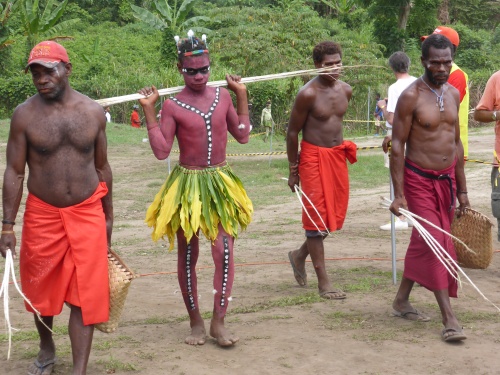 This very eerie lad was whipped in the whip dance. Another ate hot coals while yet another ate a glass bottle. But mostly it was singing and dance.

A few children got into the spirit

Some were great little dancers

Mostly the dancers were men ; occasionally the women were out there too

The people of Pomeo seemed exuberant

And this was a great hat 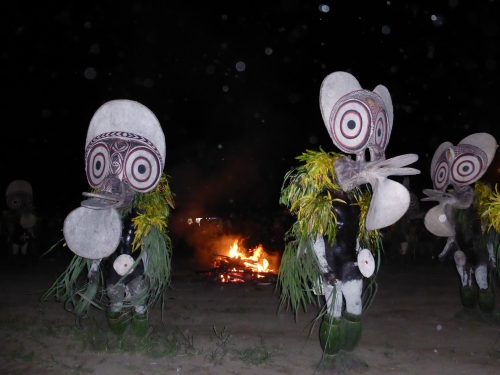 In the night the Bainings people preform their fire dance. Day 7 We skip the on-going sing sing and spend the day at Rapopo Resort around the pool. There is always someone to talk to at one of three hotels where tourists and ex-pats gather. Apart from the apparently great diving and this mask festival I am unsure why tourists would visit. Usually, most of the guests are Nationals on business or at conferences. Given its relative safety, this is a popular conference destination.

Day 8 Up the north coast for lunch at Kabaira Beach Hideaway and to hear fascinating stories about the history of the region from Lyn and Albert who live there. Albert was born here and Lyn came from Australia in the early seventies. I am particularly interested in their story of the events leading up to the Emanuel murder; this was the house where the man who did the long time in jail came to hide after the deed. The murder, the first political murder in PNG, was committed on Kabaira plantation. 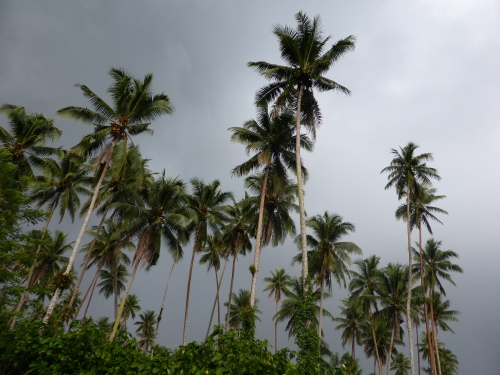 My week was ending as it has begun with thoughts of my first trip 40 years ago. As usual dinner at one of the hotels but New Ireland lobster for dinner at Rapopo was better than the usual and a good ending to a fascinating week. And over it all, the ring of volcanoes reminds the people of its presence.