Arnhem Land is in the northeast corner of the Northern Territory of Australia. It is First Nations’ country.

Covering approximately 98,000 sq kilometres, Arnhem Land Reserve was proclaimed in 1931. The first public political action by the local community was in 1963 when the Yirrkala people concerned about land rights and the incursion of mining, presented the Australian parliament with the now famed Bark Petition which gave Aboriginal peoples hunting rights and the right to protection of sacred and other sites. In  1977, the Aboriginal Land Rights (Northern Territory) Act 1976 was proclaimed.

Arnhem Land is under Northern Land Council control and the Council issues permits for entry. Unless you have business there such as servicing and supporting the 12,000 indigenous people who live in small settlements and outstations, you are unlikely to get a permit for anywhere but peripheral areas.

I chose to travel with a travel company since they are the only ones with a special arrangement to drive across the country and stay at specific camps; as the driver kept telling us, the conditions attached to the permit were stringent. On some sections of the main earth road (travelling from Katherine to Nhulunbuy) you must conclude your travel within eight hours; on others, there is no stopping at all, even for a cup of tea.

The driver told us more than once that we should think of this as another country, one that required a visa.

Apart from the 12,000 indigenous people who live here, there are an additional 4,000 people many of whom work for the large bauxite mine on the Gove peninsula, adjoining the town of Nhulunbuy, our starting off town.

Mining in Gove has long been contested. In 1971, the Yolngu people took court action against the Commonwealth of Australia and Nabalco, and lost. In 2002 the alumina refinery had a major expansion and Rio Tinto took over.

Mining is contracting substantially. Nhulunbuy had a population of 4000 in the 1970’s; it is now 2,500. The week I was there the Arnhem Club shut its doors. The town is looking to diversify in the chase for future employment.

The first full day we took a look at the old works where bauxite had been refined to alumina. Now closed they present a huge industrial landscape, eerie in this remote corner, sunk capital in a wasteland of useless infrastructure. 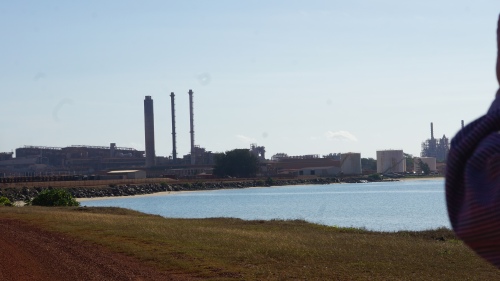 Right now other miners, specifically the frackers, are reported to be sniffing around Arnhem Land

I joined a tour— 10 couples, a single bloke and me. (Having a different lifestyle, I had forgotten how all encompassing coupledom was). We were to travel from east to west, from the Gove peninsula across the top to what is almost the top tip of Australia at Seven Spirits Bay northwest of Darwin. (See map on part 2.)

We moved in a huge Mercedes transport. The company takes a transport through ever 2 days in the season. There are 5 stops on the 12 day tour.

I flew into Gove airport and stayed in Nhulunbuy, which services mine workers, tourists and local Aboriginal communities. Eighteen ks south is the town of Yirrkala with a population of 809. The Yolngu people have lived here for some 60,000 or more years and have given Australia artists, a famous model and footballer, not to forget the rock band Youthu Yindi or members of the Yunupingu clan, Mandaway the musician and Galarrwuy a political leader.

Yirrkala is home to a number of leading artists whose work, primarily bark paintings, are in galleries around the world

Our visit to Yirrkala started with a set piece welcome to country at Wirrwawuy beach enacted by members of the Galpu clan. I wondered whether they got tired of the repetition every second day from early May to late September but then I figured it is really just their job.  First there were a number of short dances followed at another beach by a demonstration of traditional healing where women poured a special boiled leaf liquid over ageing tourist bodies.

The whole troupe was not there because some had travelled days away to attend a ceremonial funeral.

Men sang and played the digeridoo and clapsticks while other members of the clan danced. The women dressed in rainbow colours to honour their totem, the rainbow serpent

How could anyone resist the youngest of the dancers?

Best of the welcome was meeting 89-year-old Djalu Gurruwiwi a traditional custodian of the yikadi (didgeridoo) for all of Australia. This gentleman has played the didgeridoo for many eminent people including the English Queen. The didgeridoo is made from the trunk of the stringy bark gum that has been hollowed out by termites. The stringy bark is shallow rooted and when water logged hollow trunks fall over in the wind.

This gentleman, as the Custodian of the didgeridoo, has meet the English Queen.

We finish the visit to Yirraka with a visit to the art centre. Art is integral to cultural tradition and its maintenance and is now a generator of employment in remote outstations and towns. 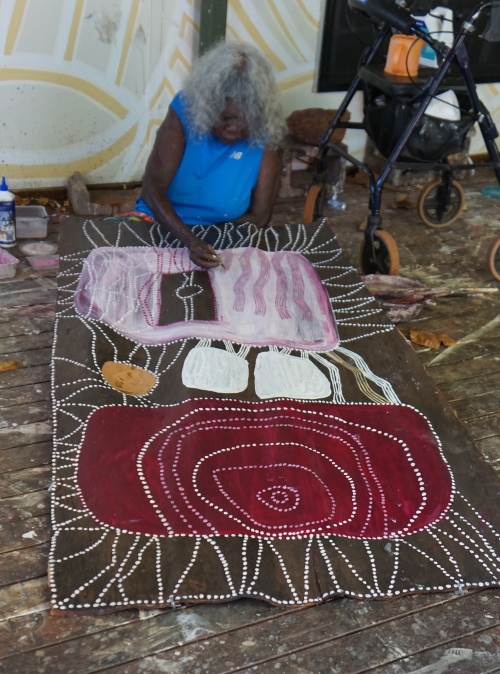 Great painting on the side of a building

The day concluded with a visit to the Makassan Beach Interpretative walk. Yolngu traded with the Makassan people from Sulawesi (and possibly from as nearby as Timor) in return for their right to fish for trepang (sea cucumbers). Trade was happening in the mid 1700s while some historians say it started as early as 1640; some rock art carbon dating supports even earlier visits. Trepang was prized for its culinary and medicinal values. About 1,000 Makassans arrived with the northwest monsoon each December; trade only stopped towards the end of the 19thcentury when the English authorities began to impose custom duties. Crews set up on beaches where they boiled and dried the trepang to enable it to be transported for sale to Chinese merchants.

The exchange involved the trade of cloth, tobacco, metal axes and knives, rice and gin. The Yolgnu also traded turtle-shell, pearls and cypress pine and some were employed as trepangers.

Helpful signage on the interpretative walk

Leaving the Gove Peninsula we drove for more than half a day on the Central Arnhem road through my first exposure to country.

First impressions were of the clean sharpness of the colours, the spearmint green of new gum growth, the bauxite red of the road, the cobalt blue of the seas, the strong green of the red gums.

Hour after hour, the road is ochre and sometimes red ochre 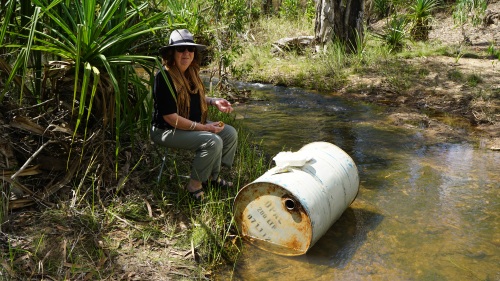 Lunch on a barrel by a peaceful creek

For four hours all we saw were a few work trucks on the road and a landscape punctured with large, maybe 6 foot, termite nests. In the last hour trees, blown down by a previous cyclone, lay end to end, their dead skeletal trunks resonant of sculptural shapes. 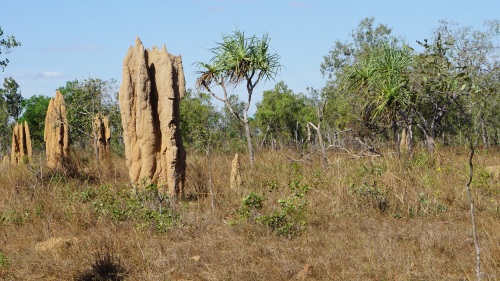 Next stop Murwangi – the Arafura floodplains