Berlin was the symbol of the Cold War – that shadow cast over relationships between the USSR and the west from the 1950s through to the final decade of last century. This was a period of international hostility which some believed could erupt into war at any time.

With its division into two Berlins and later the surreal isolation of the western sector of the city by the building of the Wall around it, Berlin became the figurehead of the times. Below I write around some of the photos and some of the impression I took away. I apologise for representing history so simplistically.

The start of it.

Berlin’s post-war problems began at Cecilienhof, the summer residence of Germany’s last Kaiser, which was to play host host to the Potsdam Conference in 1945. Discussions between Churchill, Truman and Stalin sealed the boundaries of Cold War Europe for the next half-century. They divided a conquered Germany into 4 sectors – French, American, English and Russian. But Berlin was the clincher; the western sector of the city was to be an island in what was to become East Germany.

Cecilienhof where the Potsdam Conference settled the Soviet/Allied division of Europe and of Berlin. The red star of plantings was said to be a Stalinist exercise.

The first blow-up was in June 1948 when the Soviet in response to monetary crises, blocked all allied access and turned off electricity to the western sector of Berlin. For a year goods and services could only be delivered via the famous Berlin Airlift.

Three and a half million….perhaps one in 6 people, especially and young and the professionals, left the GDR in the first decade of the new “country”. Then one night in 1961 without warning the GDR administration rolled out barbed wire and tore up adjoining streets. Access to West Berlin was terminated.

Seventeen million people were cut off; 4,000 children were isolated overnight from their families; 65,000 couldn’t get to work the next day. That first morning when people saw what was happening some jumped into the west from windows of buildings adjoining the wall. Those windows were soon sealed.

That barbed wire was the beginning of the Wall or as they called it in the East, the Anti-Fascist Protection Rampart. The communist claim was that it was protecting their people from remaining Nazi elements.

The Berlin Wall was more than 140 kilometres long. In June 1962, a second, parallel fence was built 100 metres behind it. Buildings between the fences were demolished The area between the walls was the Death Strip. This area was raked to show footprints; had spikes to stop vehicles and was in sight of the guard towers should someone dare try to escape. 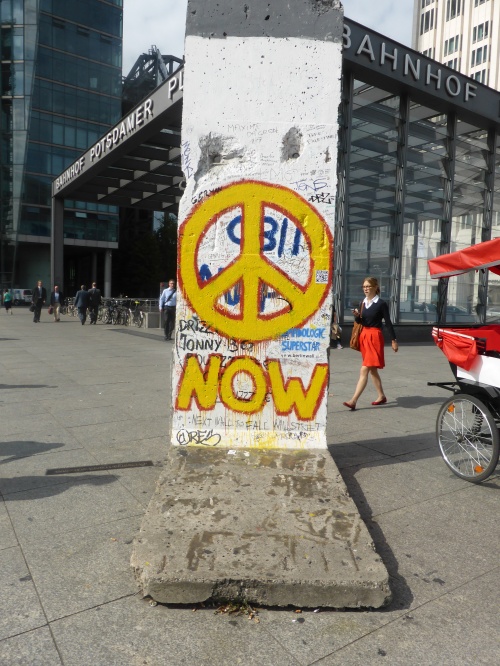 A small section of the Wall at Potsdamer Platz

And a stretch of the original.

The most famous checkpoint and the only one allied personnel and other foreigners could pass through was Checkpoint Charlie on Friedrichstrasse, now a cheap tourist replica.

More interesting is the exhibition in the small museum behind Friedrichstrasse railway station on the site of the original border post. It reproduces the narrow security gates which Germans had to pass to move from one sector to the other by changing rail systems. It is said that 100 people died of heart attack with the anxiety caused at this crossing.

This was the GDR communists’ nerve wracking passageway from west to east.

While the 9 border posts remained open, any deals (resonances here of Le Carre novels) between east and west did not occur there. Prisoner exchanges occurred at Potsdam in the centre of the now-called Bridge of Spies. To this day each half of the bridge is painted a different shade of green denoting the half owned by each Germany. 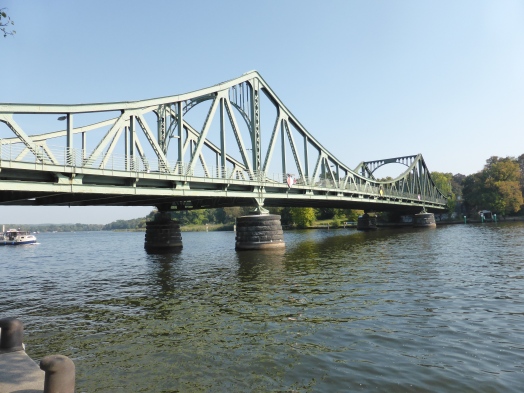 The Bridge of Spies at Potsdam

From a painting on the Wall

At the wall memorial (Berliner Mauer) along Bernauer Strasse there is a 70 metre section of the original wall. Along it is a wall of portraits of many of the estimated (as of now) 139 people who died trying to escape. Walk along to see how the Wall used to be; learn the stories and see the photos of those who died trying such as:

Stories are also told of the successful attempts. 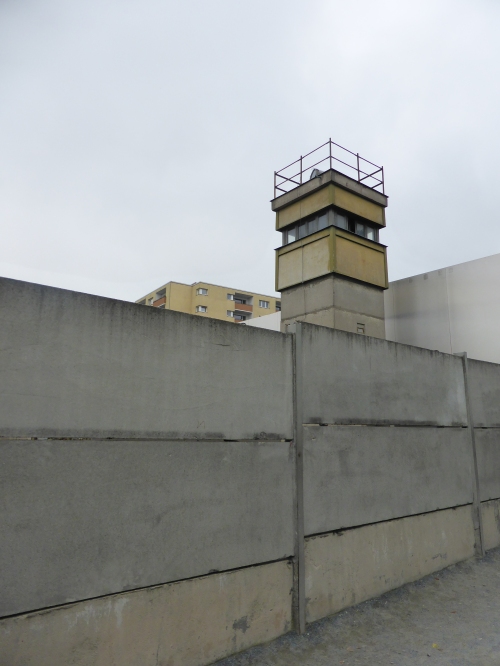 A remaining guard tower inside the concrete walls

The number of attempted escapes is quoted as 5,000 and many of the successful ones were the young police on guard duty.

The Stasi and life in East Berlin

On the eastern side of the wall, the Stasi worked at controlling the citizens. It is said that the absence of CCTV in Berlin today is a reaction against the draconian surveillance methods of the past and the reason so much table tennis is played in Berlin was that in the East this was the way people could interrupt any microphone surveillance.

Nowhere is the insidious story of the Stasi so well told as in “Stasiland” by Anna Funder.

Fifteen thousand people worked in the Stasi HQ which now houses a small museum again with stories of those whose lives were affected. There was one spy, often local “informers”, for every 7 citizens. When the Wall came down citizens were able to access the 111 miles of files and seek out their own story. Many found that neighbours and even relatives had informed on them such was the pervasive environment of threats and fear. 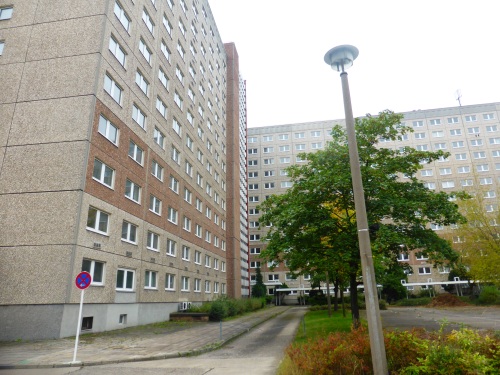 This whimsically display in the Stasi museum was probably displaying the various chair seats left by the bureaucrats.

In Nuremburg the “puzzle women” are working still at piecing the shredded files together.

Opposition to the Wall in the East.

The German people continued to show their scorn for the bureaucratic, moralistic and spying communist regime. At the minor end of the spectrum it was the symbolic growth of  nude sunbathing.

Here at the park in Potsdam nude sunbathing continues. Anecdotally it is said to have grown as a protest against the rigours of the communist era.

More seriously….in the early days, overt protests happened. On June 16 1953 there was a strike by workers building new housing near Frankfurter Tor. On June 17 1053 there was a small revolution when 40,000 people marched to the Brandenburg Gate chanting: “We want food, we want bread; we will kill the Russian dead”. Troops opened fire. Later public meetings of more than 6 people were forbidden.

The workers strike in 1953 was by workers building the housing here at Frankfurter Tor.

In the ‘80s Gorbachev in Russia began his policies of Glasnost (openness) and Perestroika (reform). The border with Hungary was opened and thousand of GDR citizens left that way. In East Germany small gatherings often in churches were signs of a liberation movement gaining confidence. In 1989 an East German official, wrongly briefed, said in a TV interview that relaxed border restriction in Berlin would come into effect immediately. An avalanche of people immediately descended on the Wall and there was no holding them back.

There are a few remnants of the Wall at Potsdamer Platz which has been totally redeveloped since it was totally demolished through bombing and then by demolition for the Wall. The Berliner Mauer memorial along Bernauer Strasse is a strong tribute to the hardship of those times but unification is really celebrated in the East Side Gallery where artists painted over the remains of the concrete barriers. Sadly graffiti has damaged much of it.

The most popular Wall painting of all -Leonid Brezhnev and Erich Honecker kissing as painted by Dmitri Vrubel. 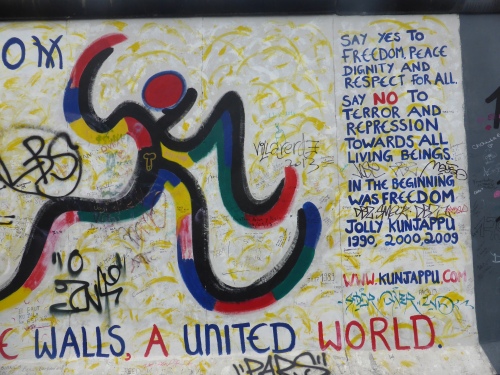 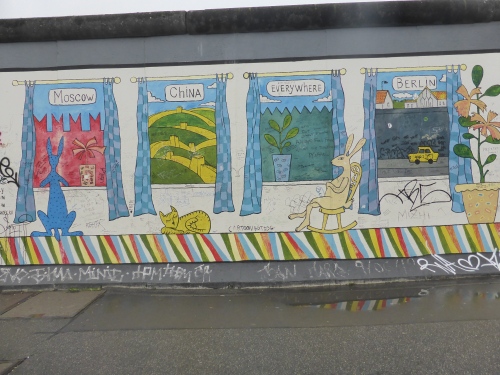 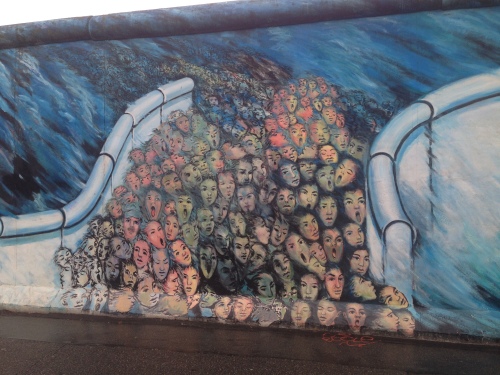 This November marks the 25th anniversary of the Wall coming down and Berlin will commemorate it with a light installation set up along the former path of the Wall as a “symbol of hope for a world without walls”. Made of thousands of illuminated, helium-filled balloons, a border made of light will run for 12 kilometres across the city centre for a weekend. At 5 points balloons will be released to the sky to commemorate the opening of the Wall.